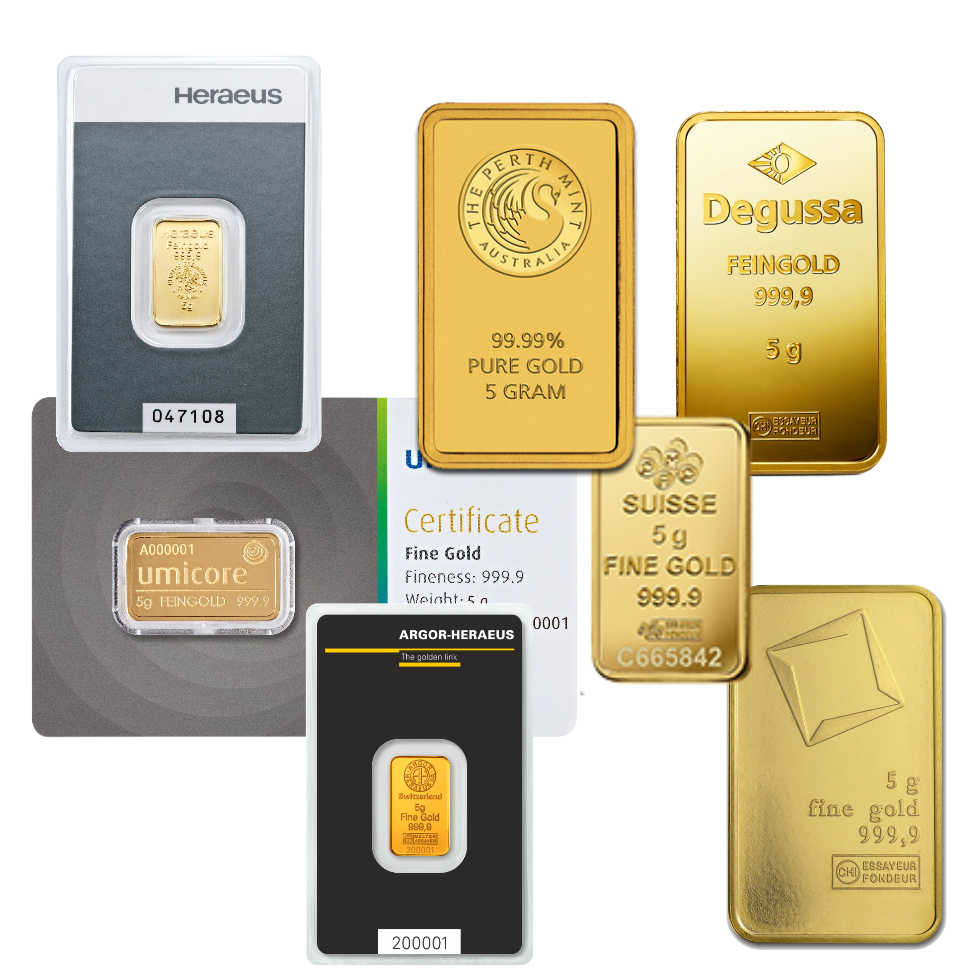 We sell usually the 5 grams Heraeus gold bars but may add a different manufacturer if needed. All gold bars have been inspected and approved a minimum fineness of 999/1000.

All Heraeus gold bars manufactured after 2011 are sold with Certificate in a plastic blister as shown.

Please be advised that the photo serves just as an example. We reserve the right to supply similar products from recognised manufacturers, such as, Heraeus, Umicore/Degussa and UBS.

The History of Gold Bars:

The History of gold bars is even older than the history of coins. Around 5,000 years ago the first gold bars, although small were produced.

Copper, Zink, Silver, Gold and Bronze Bars were transported to far away destinations from the mines to later produce weapons, statues and tools. Especially silver and gold bars have been used to trade products in the Mediterranean area. One could say that bars have been used as pre-coinage. Only later coins were introduced to make trade easier and more fungible with smaller denominations.

Also the minted coin gave (not always, though) a guaranty about weight and purity. The purity and weight of the bars and coins used varied within 5%. Of course in modern days we have gold bars refined to 999/1000 fineness or 24 carat with exact weights in metric grams and/or ounces.

When talking about manufacturers of gold bars one often talks about LBMA accredited. The LBMA is short for the London Bullion Market Association and since 1919 the LBMA has traded bars that have these quality criteria:

The first list of approves LBMS “Melters and Assayers is dated to 1934.

The worldwide most known bar manufacturers that are LBMA approved are:

How gold bars are manufactured

There are different ways of manufacturing a gold bar, the smaller up to 1 kilo in size bars we’re trading are cast bars. Gold granules or small cut pieces will be placed into a mould and weighed to the exact needed amount. The mould is then heated usually with an induction furnace which relies on electro-magnetic frequency to induce heat which melts the gold fairly quick.

Other methods may (although used in manufacturing) contaminate the gold when part of the furnace lining or rust on the tongs transferring the crucible could fall into the melted gold.

The bar after melted is then cooled, sometimes with water or in a cooling tunnel with fully automated production chains. The bar is then removed from the water tank, cleaned and weighed. If the bar doesn’t show the exact weight it will be melted again. The more modern method is to melt several bars directly in a row of moulds. This process is allows the manufacturer to produce several bars at the same time.

After the bars have been approved they will get marked usually with a hydraulic press.

The more modern method is to produce bar stock of the required width and thickness on a continuous basis using a continuous casting machine. This machine consists of a graphite block (the die), through which an orifice is machined to the width and thickness of the required bar stock. This orifice is attached to the aperture of a graphite crucible in which the gold at a specified purity is melted, normally by induction heating or resistance element heating. The die is also clamped between two cooling blocks through which water is passed.

A starter bar, machined to fit the channel in the die, is inserted into the orifice as far as the crucible, while the other end is clamped into the withdrawal mechanism. When the melted gold has reached the required casting temperature, the process is started by pulling the starter bar out of the die in a series of short pulling movements.

As the bar is drawn through the die, the gold gradually solidifies, emerging as a cast bar which is then cut to the required length (excluding the starter which is removed). Gold in the form of granules or cut pieces of large bars is added to the crucible at intervals to maintain continuous production. (Source: The Perth Mint)