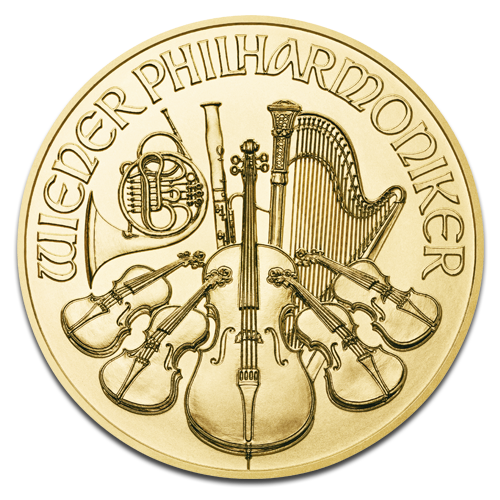 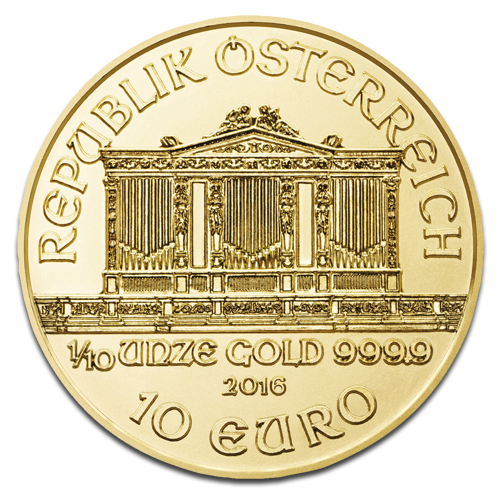 The 1/10 oz Gold Philharmonic fractional coin was introduced in 1991 and is one of the most popular bullion coins in Europe. The 2016 1/10 Gold Vienna Philharmonic is available in “uncirculated” mint condition. Current year gold coins, like the 2016 1/10 oz Philharmonic, are popular because the design and the beauty of the coin is greatly enhanced due to their flawless condition. This is also a popular choice for collectors who want to own gold coins that are free of any surface impurities.

The 1/10 oz Gold Vienna Philharmonic is 99.99% pure 24 karat gold. The specifications for the coin are listed below.

In 2014 the Austrian Mint produced a 1/25 oz gold Philharmonic, which is the smallest coin in the series. However, the 1/10 oz is a more common smaller size. Many other mints like the US Mint and Canadian Mint produce fractional size gold coins that also come in 1/10 oz. Fractional gold coins are for those investors who are seeking alternative sizes and weights to the 1 oz coin. This provides the investor or collector with more pricing flexibility. Along with the added price flexibility, fractional coins have the same brilliant design and ascetic appearance as the 1 oz coin. It should be noted that fractional sized gold coins will often carry a higher premium than 1 oz coins. Generally speaking, the smaller the fractional coin the higher the premium. This is due to higher manufacturing costs that are associated with minting small coins. The 1/10 oz fractional Gold Philharmonic is a very common size. Therefore, these coins are easily bought and sold at precious metals dealers around the world. The Gold Philharmonic series is the best selling in Europe and also a top seller globally. As a result, regardless of were you live, the 2016 1/10 oz Gold Philharmonic is a excellent choice for an investor or collector to consider.