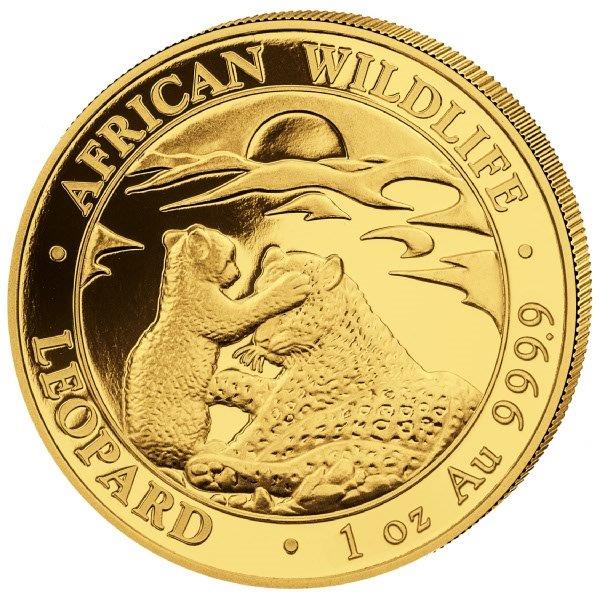 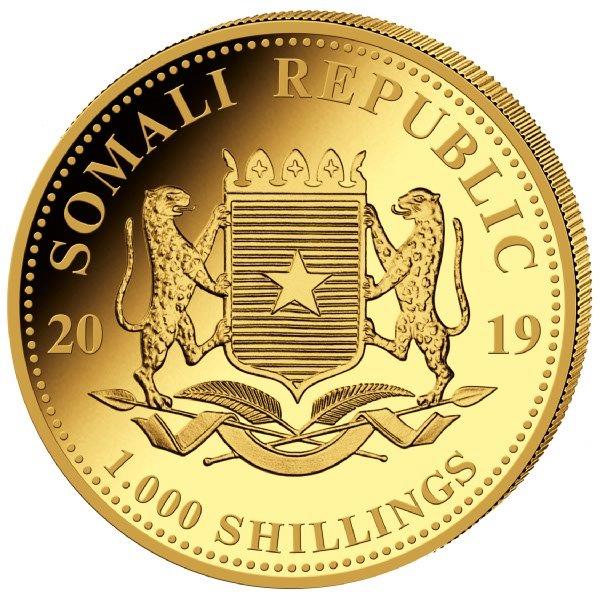 The 2019 edition of the Somalia Leopard Gold Coin is limited to 1,000 pieces. Due to the extremely attractive design and the limited mintage there is a potential for appreciation. The Somalia Leopard is ideal for both collectors and investors.

The design of the Somalia Leopard Gold Coin changes annually, but will always show one or more leopards in their natural habitat.

The Somalia Leopard 1 oz gold coin is issued by the Republic of Somalia and manufactured by the Bavarian Mint in Munich.

Somalia Leopard 1oz gold coins are 999.9/1000 pure and have a diameter of 38.6 mm and a thickness of 1.55 mm. The face value is reported as 1,000 shillings. The coin has an edge bar and a corrugated edge. The two features are for safety and protection against damage.

The motif side shows a female leopard with her cub against the background of the African savannah with sunset. The motif is very realistic, depicting the detailed pattern of the leopards coat. The motif surrounds a visually offset border area with the inscription "AFRICAN WILDLIFE ● LEOPARD ● 1 oz Au 999.9".

The value side shows the coat of arms of the Republic of Somalia held by two leopards. The coat of arms is set in a shield with a five-pointed crown. The leopards are depicted standing on crossed spears decorated with banners and palm fronds. The inscription on the top outer edge reads "SOMALI REPUBLIC". Surrounding the bottom outer edge is the face value of "1000 SHILLINGS". The year 2019 is shown in the middle, to the left and right of the leopards. The edge bar is highlighted by a border of dots.

The African Leopard and the "Big Five"

The gold coin is dedicated to the African leopard, which like the elephant belongs to the Big Five.

The "African Big Five" includes the African elephant, lion, leopard, buffalo and white-footed and black rhino. These five African animals are the most popular photo opportunities on any safari and are specially protected. In the 19th and 20th centuries, these five animals fell victim to big game hunters from Europe and America. These animals were considered the five most dangerous animals that could be hunted with a weapon on foot by safari hunters. Elephant tusks, Buffalo horns and skulls, Rhino horns, and the fur of the lion and leopard were all used for trade. The heads and paws of the lion and leopards were sold and used as rugs for the salon or the gentlemen's room. These hunting trophies adorned in the stately homes.

Today, the hunt for the Big Five is prohibited. The animals can be found today in national parks that support species conservation.

The leopard belongs to the family of cats and live mainly in Africa and Asia. The leopard is listed on the Red List of Endangered Species.

Only about 250,000 leopards live in Africa. The largest population is south of the Sahara and in the dense tree and bush savannas of East Africa. Especially sought after was the Leopard due to its exceptional coat color. From 1976 to 1990, up to 86,000 leopard skins were traded each year. Due to strong trade restrictions and outlawing fur clothing, the leopard skin trade came to an end. Today, the Leopard is threatened by the destruction of its habitat by humans. Natural enemies of the leopard are lions, hyenas, jackals, and wild dogs.