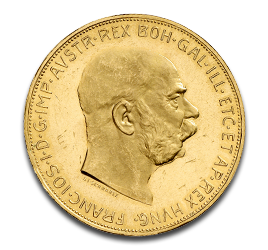 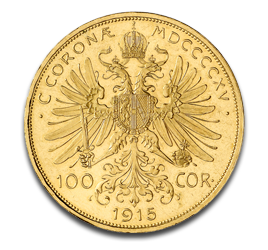 The Austrian-Hungarian 100 Corona gold coins were minted in from 1908 to 1915. The newer official issues from the Austrian Mint show the motif and design of the 1915 edition.

100 Corona Gold coins are intricately designed and represent a piece of Central European history. These Austrian coins enjoy a wide following in Europe as well as world wide. They are one of the few bullion coins that have traded for more than 50 years.

The coin consists of a gold copper alloy, with a gold content of 900/1000. The fine weight (gold content) of 100 Corona Gold coins is 30.49 g. Due to the higher copper content, the coin has a good scratch resistance, but also a clearly visible golden red color - typical for circulating coins of that time.

There are four different versions of the Austrian 100 Corona Gold coins - but this only applies to the coin motif, since the fine weight is always the same. Austrian gold coins have a smooth coin edge and an edge bar, with an ornamental circle.

Austrian Emperor Franz Joseph I is depicted on the front. Depending on the edition, there are different representations of the Emperor on the coin. The reverse shows a variant of the Austrian-Hungarian coat of arms. Also depicted are a double eagle with crown, scepter, sword and shield.

Below the motif, the year is shown with the nominal value - further information differs from one year to another.

"Corona" is Latin abbreviated as COR. In addition to the 100 Corona gold coins, there are  20 Corona and 10 Corona coins.