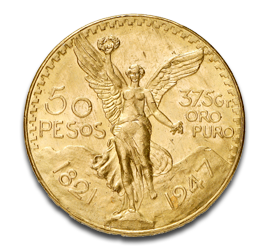 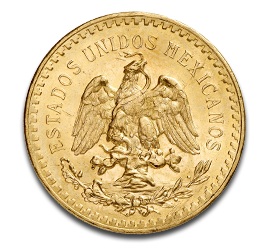 The Mexican 50 Pesos Centenario was one of the first bullion coins in the world. The coin impresses with its good scratch resistance, which is linked to the increased copper content. The fine weight of the coin is 37.50 grams.

The 50 Mexican Pesos gold coin is also called 50-Pesos-Centenario. It was introduced in 1921 to commemorate the 100th anniversary of Mexico’s independence from Spain. The gold coin was struck in 1921 to 1949 by the Casa de Moneda de Mexico. Due to the large demand, about 4 million gold coins of the Centenario coin series were minted from 1949 until 1972.

But all coins show the minting year of 1949. Furthermore the 50 Pesos Centenario gold coin is the biggest coins of the Centenario coin series. The other weights in the series consist of  20 Pesos gold, 10 Pesos gold, 5 Pesos gold, 2.5 Pesos and 2 Pesos gold coins. The term "Centenario" is Spanish and translates to "centenary".

The reddish-golden color of the gold coin is caused by the 10% copper content within the gold alloy. The coin has a small edge bar. Instead of a rippled edge, the coin has a smooth edge with the inscription "Independicia y Libertad" which means "independence and freedom". The front shows the victory goddess with wings outstretched. The goddess holds a laurel wreath in her outstretched hand, which is a symbol of freedom. Two Mexican volcanoes are depicted in the background.

To the left below the motif, 1821 is engraved, which is the date of independence from Spain. On the right side, also slightly below the motif, the year of mintage is shown. Directly to the left from the main motif is the face value "50 Pesos" and to the right, the fine weight "37.5GR ORO PURO". The reverse depicts an illustration of the Mexican crest in front view. The reverse also displays an eagle holding a snake in it’s claw and beak. The eagle sits on a cactus, which stands on a rock in the middle of a lake. The inscription is "ESTADOS UNIDOS MEXICANOS", which means "United States of Mexico".