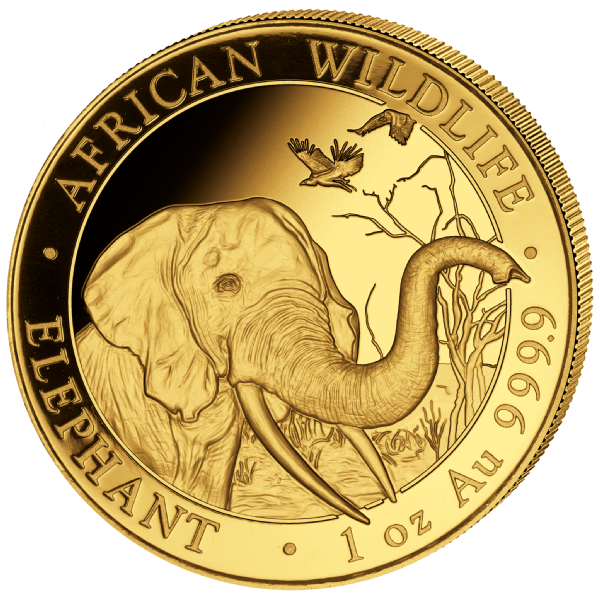 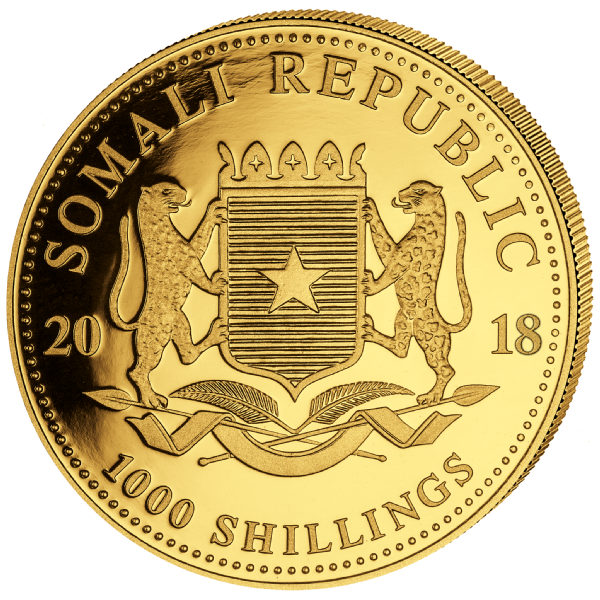 The Somali Elephant Gold coin from the "African Wildlife" series was first introduced in 2010. The design of the Somalia Elephant Gold Coin changes every year, but will always depict an elephant in its natural environment. Since 2016, the gold content has been 99.99%, which was increased from 99.9% for the previous editions.

The motif side of the Somalia Elephant 1 oz gold coin 2018 shows the head of an African elephant with raised trunk and imposing tusks, which protrude into the edge of the coin. The background has a smooth surface and depicts a desert-like environment with birds, branches and grass behind the elephant. The inscriptions on the outer edge are "AFRICAN WILDLIFE", "ELEPHANT" and "1 oz Au 999.9". The edge is ribbed and the edge bar slightly raised, which protects the surface of the coins.

The value side of the "Somalia Elephant" shows the state coat of arms of Somalia, which has been the official state seal since 1956. There are leopards on the left and right holding a shield with a five-pointed star in the center. Below the shield are two crossed palm fronds and spears with a curved banner. The coin image is surrounded by a circle of dots.

The coat of arms is framed on the left and right by the numbers "20" and 18 ", which together represent the year of issue "2018". The country of origin "SOMALI REPUBLIC" is engraved along the top outer edge. The nominal value "1000 SHILLINGS" is shown in the lower margin area.