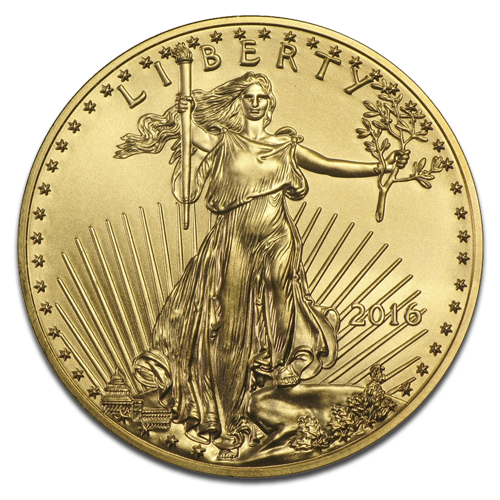 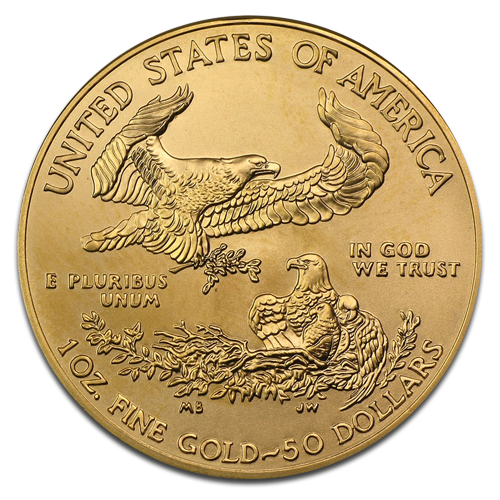 The American Eagle 1oz 2016 gold coin is now available. The best-selling gold bullion coin of the United States, consists of 22 carat pure gold, with proportions of silver and copper. The American Gold Eagle is exempt from VAT, has good scratch resistance and has a very nice golden color.

This is a rather unusual composition and has the advantage of a very slight red color tint which is caused by the copper content. The bullion coin also has a small amount of silver content, which makes the coin bright and shiny.

There are two small drawbacks for the use of silver in the alloy. Firstly, silver is very soft and thus the typical hardness of a 22 carat alloy, as is the case with the Krugerrand, is not reached. Secondly, the premium for American Eagle 1oz 2016 is slightly increased because of the silver content which is more expensive than copper.

The American Gold Eagle has been around since 1986. The Year coincides with the ban on imports of Krugerrands, which were imposed by the United States and the European Community. The first edition included four weights: 1oz, 1 / 2oz, 1 / 4oz, 1 / 10oz. The first edition of the American Eagle 1oz included 1.3 million pieces. While the timing of the first edition was very well chosen, she never had the resounding success as the Krugerrand, Maple Leaf or the Vienna Philharmonic.

The American Gold Eagle is a very beautiful gold coin. In spite of 5.33 percent copper content, she does not possess the typical golden reddish color of a 22 K gold coin. The edge rod improves the stackability and together with the Riffelrand, a relative security against the separation of gold is guaranteed, as one would detect tampering immediately.

The design of the front is the allegory of the "Lady Liberty" and stands for freedom. In her right hand she holds a torch which she points to the front and in her left hand an olive branch, which is also a symbol of freedom. The coin shows her standing, parked with fluttering hair and the left leg on a rock. Under the rock you can see a number of oak leaves, which are to represent the military strength of the United States. Right next to the bottom of the obverse is the Washington Capitol. Behind the Lady Liberty the rising sun is illustrated. A 50 star counting ornamental circle surrounds the outer edge of the coin. The 2016 embroidering is marked toward the bottom right of the coin.

The design of the back shows three eagle’s. The male can be seen in flight above the nest, in the mouth it carries an olive branch. In the nest is a female eagle that spreads its wings protectively around her cub.

Overarching federal authority for the production of American Eagle is the "United States Mint" based in Washington. The US Mint has four mints: Philadelphia, Denver, San Francisco and West Point. It was founded in 1792 and is part of the Department of Treasury. As a manufacturer of the American dollar, it is an important authority in the administrative apparatus of the United States.

Before deciding on the American Gold Eagle, one should be aware of its advantages and disadvantages. Among the advantages is undoubtedly the combination of good durability and scratch resistance, which is slightly below an ordinary 22K gold coin. She also has a very nice gold color, which is caused by the three percent share of silver. A disadvantage of the American Eagle 1oz 2016 is the increased premium of approximately 1%.

How is the price of American Gold Eagle together?

The price of the American Gold Eagle 1oz 2016 is made up of the current gold price and the premium levied by the Mint and the seller. The price of gold of course makes up the majority of the total price, so the time of purchase is crucial to ensure that you get the highest possible value for your money. During periods of high demand and low supply premiums will rise.

The premium fee is charged by the Mint and the seller. The premium is the result of stamping costs and profit margin for the mint. In contrast to the production of gold bars, which are mostly cast, the process of minting coins is relatively expensive, with regard to the small amount of gold that is processed per coin.

The seller, of course, also includes costs associated with shipping and insurance on the price of the American Gold Eagle 1oz 2016.

Another factor that increases the price of American Gold Eagle is the fact that newer vintages are usually more expensive, because they are in high demand and usually have the degree of preservation "uncirculated".

Still a tip you should take to heart is the fact that smaller weights below 1oz, have a much higher premium. For example 1/10oz American Eagle gold coins are more expensive to produce and therefore come with a higher premium.

What makes the American Eagle gold bullion coin good for investors is that the coin offers a high value for the money. The purchase of gold coins is ideal for value investors as long as the coin carries the status of a gold bullion coin, and is therefore exempt from VAT. The American Gold Eagle is one of them, since it meets all the criteria, which are anchored in the German section §25c UStG.

The gold coin has to be marked before 1800’s. It must be legal tender in the country it has been manufactured and the fineness must be at least 900/1000. Also, the price of the gold coin, the open market value shall not exceed more than 80%.