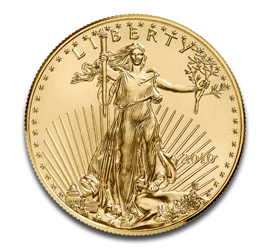 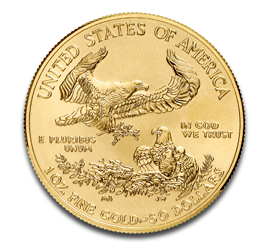 The American Gold Eagle is one of the best known bullion coins in the world. It combines the advantages of a 22 K gold alloy, such as scratch resistance, with the beautiful golden coloring of a 24 K gold coin. While the American Eagle has its advantages, the disadvantage results from the addition of the precious metal silver to the alloy. The 3% silver content in the American Eagle gold coin slightly increases the premium compared to other bullion coins.

The 22K gold alloy of the American Eagle consists of 91.67% gold, 3% silver and 5.33% copper. This is generally regarded as an unusual composition, and has a great advantage compared to the normal 22 K gold/copper alloy. Because of the silver content, the American Eagle, does not have the typical reddish color that is seen with other 22 K copper/gold alloy coins like the Krugerrand. Therefore the American Gold Eagle has a beautiful golden color. Another advantage is that the discoloration of the coin, which naturally occurs over time, is not as noticeable because of the lower copper content of 5.33%. Copper will oxidize over time which is a negative property. The typical bright copper color will eventually change into a darker color.

The Krugerrand has a higher copper content and therefore will become darker over time. But on the other hand, the color change attribute of the Krugerrand is simultaneously also a hallmark. The real strength of a 22K alloy is its scratch resistance, which is why it has been used for the last several hundred years for circulation coins and today for investment coins. In this case, the American Eagle loses a little bit of scratch resistance, because silver is a very soft precious metal just like gold.

Minted in the standard sizes of 1oz, 1/2oz, 1/4oz and 1/10oz, the American Gold Eagle is available for all types of buyers. The nominal value is in US-Dollars and the coin is legal tender status in the United States. The total weight of the coin is always higher than the fine weight, because as already mentioned, the coin contains copper and silver.

The history of the American Gold Eagle begins with the import ban of Krugerrands in 1986. The apartheid in South Africa caused an embargo of products from South Africa, which was enforced by the United States and the European Community.

With the embargo, an opportunity existed for other mints to introduce bullion coins to the market. And the United States mint was one of the mints that took advantage of the opportunity. The official U.S. Mint introduced the Gold Eagle in four sizes to the market, which include 1oz, 1/2oz, 1/4oz, 1 / 10oz. Also in 1986, the American Eagle was released in silver. The Silver Eagle is only minted in the 1oz size and has a fineness of 999/1000.

The American Gold Eagle depicts the typical symbols of the United States; these include the Lady Liberty, Olive Branch and Eagle. The coin features a rippled edge and an edge bar. Both elements are used for safety and aesthetics. In addition, the edge bar improves stackability of the American Eagle.

The obverse depicts Lady Liberty standing upright. She was worshiped in Roman culture as a Goddess of Liberty. The Lady Liberty carries a torch in one hand and an olive branch in the other, which stands for freedom. She wears a robe with sandals. In this illustration, she has her leg turned on a rock. Below, closer to the edge are oak leafs, which is a sign of military strength. The Capitol is depicted at the bottom toward the front of the American Gold Eagle. The motif is surrounded by pointed lines representing the rising sun. Also adjacent to the edge bar a 50 star ornamental circle can be seen. The mint mark "W", which stands for the mint in West Point, is shown only for Proof American Eagle gold coins. The word "LIBERTY" is imprinted above the motif and the year of issue is displayed to the right.

The central theme of the back is an eagle landing on his nest, holding an olive branch in its beak. A female eagle with her baby sits in the nest. Right and left of the motif are the words "E Pluribus Unum" which means "from many, one" and "IN GOD WE TRUST". Both are mottoes of the United States. Above the motif along the edge, the words "UNITED STATES OF AMERICA" are seen. Below the motive the fine weight, the name of the precious metal and the face value are embossed.

The biggest advantages of the American Eagle are the scratch resistance and the beautiful golden color. It is almost impossible to obtain both properties at a high level. Gold is very soft and the proportion of copper gives the coin good scratch resistance. But copper will oxidize and turn into a dark red color. So with the addition of silver, the American Eagle has an ideal combination of durability and a bright gold coloring.

The American Gold Eagle is also available in "Proof". The special feature here is the different steps of the minting process. For example, inserting the coin into the press will be carried out by hand, to prevent mechanical damage on the surface. The "Proof" version is delivered with a certificate. Another feature is the minting of roman numerals for the years from 1986 to 1991.

The manufacturer of the American Eagle is the United States Mint. It is an official federal agency of the United States of America and the Department of the Treasury. The U.S. Mint is responsible for the printing of the dollar and is headquartered in Washington, D.C.

Overall, the US Mint has five branches:

Buyers of gold bullion coins should consider certain factors that also apply to the American Gold Eagle. The premium is important because it allows the buyer to compare price differences between various banks and sellers. Furthermore, you should decide whether to buy a relatively soft 24K gold coin or a more scratch-resistant 22K gold coin.

The premium on gold coins is usually 3 to 6% above the price of gold. The American Eagle usually carries a higher premium because of the silver content. In principle, the premium describes the total cost and margin of the mint and sellers. The premium can vary between the various precious metal dealers and banks as cost structures may be different.

Different premiums can also be found in the various ounce weights. The smaller sizes such as 1/10 have a higher premium, compared to a 1/2oz gold coin. This is because the same workload in embossing, storage and sale needs to be applied despite the smaller weight.

Furthermore, current years are more expensive than backdated coins. This price difference arises because the new gold coin is not yet in circulation and the degree of preservation is "uncirculated" and "mint state".