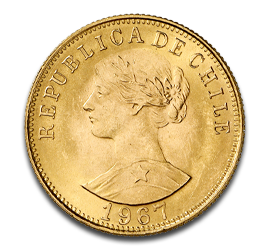 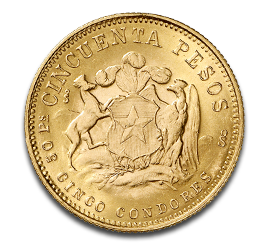 Chilean 50 Pesos Gold Coins were minted by Banco Central de Chile in the time from 1895-1980. They are traded as bullion coins and well-preserved pieces may have value to collectors.

The Chilean Pesos has an edge bar and a rippled edge. There is a decorative circle around the outer edge on both sides of the gold coin.

The obverse depicts the goddess Liberty, with a laurel wreath in her hair. The personification of the Goddess Liberty comes from Roman mythology. A star is imprinted below the motive and is part of the Chilean coat of arms and flag.


The star represents the Chilean Indians as well as honor and progress. Above the motif the inscription "Republica de Chile" is seen, below the motive the year of mintage is shown.

The back shows the Chilean coat of arms, which was introduced 1834. The caption reads "50 Ps Cincuenta pesos" and "Cinco Condores".

Chile coined the Pesos gold coins series in the denominations of 1 pesos, 2 pesos, 5 pesos, 10 pesos, 20 pesos, 50 pesos and 100 pesos between 1851 and 1980. In denominations smaller than the 50 pesos coin, the fine weight and fineness were altered in some editions.