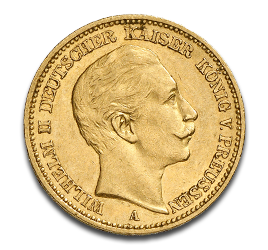 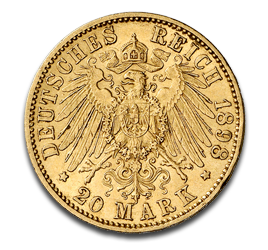 The 20 Mark Wilhelm II coin is suitable for both investors or collectors. It is a globally recognized coin that represents a part of German history.

The coins have a fine weight of 7.16g and a fineness of 900/1000. The total weight is 7.96 grams. The alloying components are 90% gold and 10% copper. Due to the high proportion of copper the coins have good scratch resistance, but also a distinct golden reddish color.

The gold coins have an edge bar and a smooth edge. The inscription reads "GOTT MIT UNS", which translates “God may be with us”. A decorative circle can be seen on both sides of the coin.

The front depicts the profile of the German Emperor Wilhelm II. The mint mark can be found below the motif. The inscription on the ornamental circle reads: WILHELM II DEUTSCHER KAISER KÖNIG VON PREUSSEN. Which translates to “Wilhelm II German Emperor and King of Prussia.

The reverse shows the coat of arms of the German Emperor. The nominal value can be found below the coat of arms and depending on the minted version reads "20 Mark" or "20 M". "DEUTSCHES REICH" is inscripted around the outer edge and the year of mintage is placed to the right of the motif.

History of the 20 Mark Gold Coin

The 20 Mark German Reich gold coins exists in a variety of variants, since many countries of the German Reich had the right to issue the coin. The front side always shows the current regents or the coat of arms (eg "Alfred Duke of Saxony Coburg and Gotha"). The coins were introduced in 1871 with the nominal value of two crowns (Also called “Double Crowns”).

As Wilhelm II was emperor and King of Prussia, the 20 Mark gold coin therefore shows not only the title "King of Prussia", but also "German Emperor".

The 20 Mark Wilhelm II Gold coin continued to be minted until 1915.