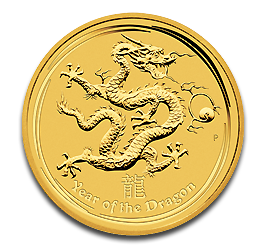 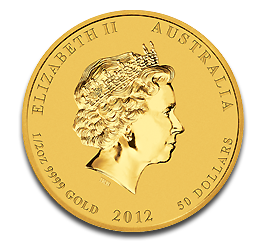 2012 is the “Year of the Dragon” and the fifth release in the Lunar II gold coin series from the renowned Perth Mint. The series consists of 12 editions, with each year depicting one of the 12 animals in the Chinese zodiac.

The motif side side of the coin depicts a four legged Dragon and the “Pearl of Wisdom”. In Chinese culture Dragons are often shown with pearls. The Chinese character for Dragon and the phrase “Year of the Dragon” are inscripted below the motif. The letter “P” is engraved on the right outer edge and represents the Perth Mint.

The value side depicts the Ian Rank-Broadley effigy of her majesty Queen Elizabeth II wearing a royal diadem. The engravings around the outer edge are “ELIZABETH II”, “AUSTRALIA”, “50 DOLLARS”, “2012” and “½ oz 9999 GOLD”