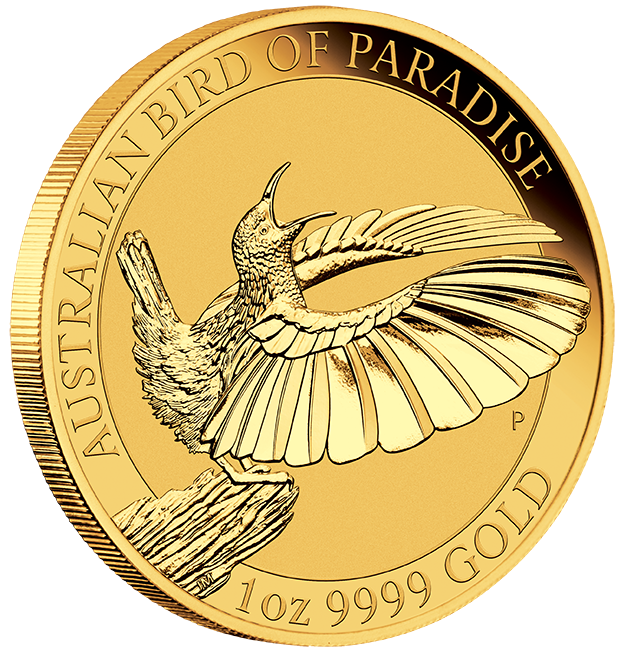 The Birds of Paradise is a new gold coin series from the renowned Perth Mint. The inaugural edition depicts the Victoria’s riflebird, which is a bird of paradise that lives in northeastern Queensland, Australia.

The Victoria’s riflebird was discovered in 1848 and named after Queen Victoria of the United Kingdom. The coin has a limited mintage of just 5,000 pieces, which makes it ideal for both collectors and investors.

The Victoria’s riflebird comes in the traditional 1 oz size and is 99.99% pure gold. The coin is also available in silver.

The motif side of the coin depicts an image of Victoria’s Riflebird. The bird is also known as the “duwuduwu” to the indigenous Yidinji people of Australia. The engravings on the top outer edge read “AUSTRALIAN BIRD OF PARADISE”. Below the motif the weight and purity are embossed as “1oz 9999 GOLD”. The letter “P” is engraved to the right of the bird and stands for the Perth Mint.

The value side depicts the Ian-Rank Broadley portrait of her majesty Queen Elizabeth II. The inscriptions around the outer edge read “ELIZABETH II”, “AUSTRALIA”, “2018” and “100 DOLLARS”.

The Victoria’s riflebird lives year round in the rainforest in Queensland, Australia. The indigenous Yidinji people would wear the colorful feathers of the bird during ceremonies and rituals.