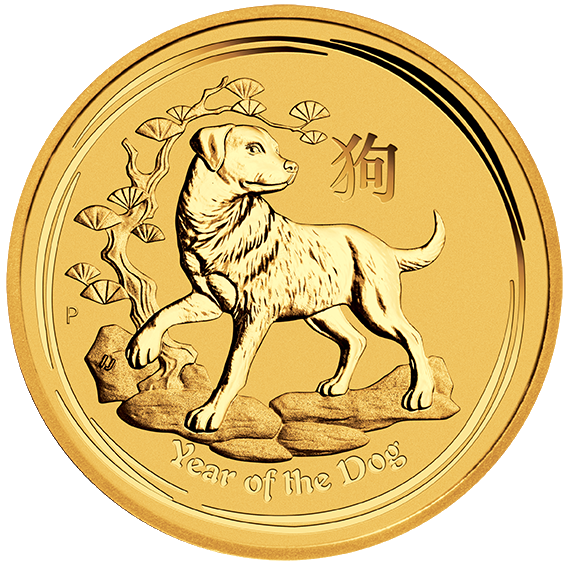 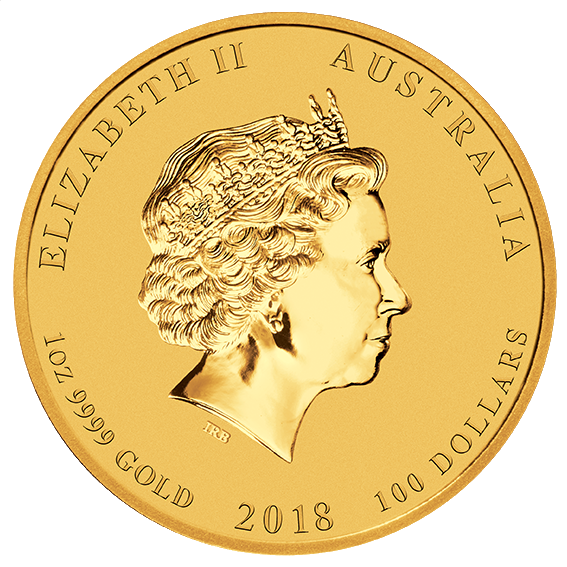 Due to the high fine content, the coin has a pure gold coloration. It is also very sensitive to scratches, since no alloying constituents such as copper or silver are used in the minting process.

The motif side of the Lunar II dog gold coin 2018 shows a Labrador Retriever standing on rocky ground. The dog's gaze is directed backwards. The rocky ground is represented by several stones and in the background is a small tree.

A "P" is stamped in the middle of the left margin, standing for the ​​Perth Mint. On the right-hand part of the coin above the dog’s back is the Chinese character for "dog". Below the motif is the lettering "Year of the Dog".

The value side of the gold coin shows an image of Queen Elizabeth II in profile. The initials "IRB" of designer Ian Rank Broadley are imprinted below. The portrait was designed in 1997.

Surrounding the outer edge of the coin are the name of the regent "ELIZABETH II", the country "AUSTRALIA", the fineness "9999", the precious metal "GOLD" the year "2018", the respective fine weight "1oz" and the nominal value "100 DOLLARS".

The Lunar Series II is minted by the Perth Mint and was introduced in 2008 in gold and silver. The coins depict motifs from the Chinese Lunar calendar. The motifs show the animal or image associated with the Chinese Lunar Calendar in the respective year. The term "Lunar" comes from the Latin word "luna" (moon). The Chinese Moon Calendar is one of the calendars that use the lunar and / or solar cycle as the basis.

According to Chinese mythology, the 12 zodiacal signs were created when Buddha's animal world was invited to attend the New Year's festival. He gave the 12 animals, who followed his invitation, a sequence in the order of their arrival. The sequence is still unchanged today and starts with "the rat", which is often referred to as "mouse" - the Chinese character allows both translations.

The Lunar II series consists of 12 coins each with a different animal motif.

People who were born in the zodiac dog are filled with integrity and efficiency. He is loyal, honest, kind and reliable. He is not very experimental, but always generous.

The Perth Mint is one of the most prestigious mints in the world and was founded in 1896 as a branch of the Royal Mint in London. The Perth Mint is famous for its huge portfolio of products and as the manufacturer of the world's largest gold coin.

The Perth Mint has one of the largest selection of investment coins, in gold, silver and platinum metals. The Perth Mint is located in Perth in Western Australia. Its most famous products include:

+ can be stored in small spaces