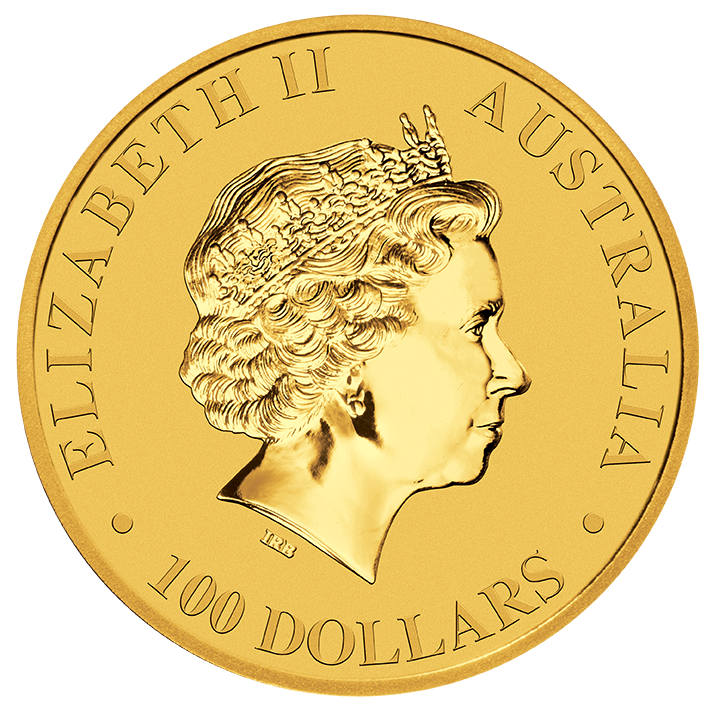 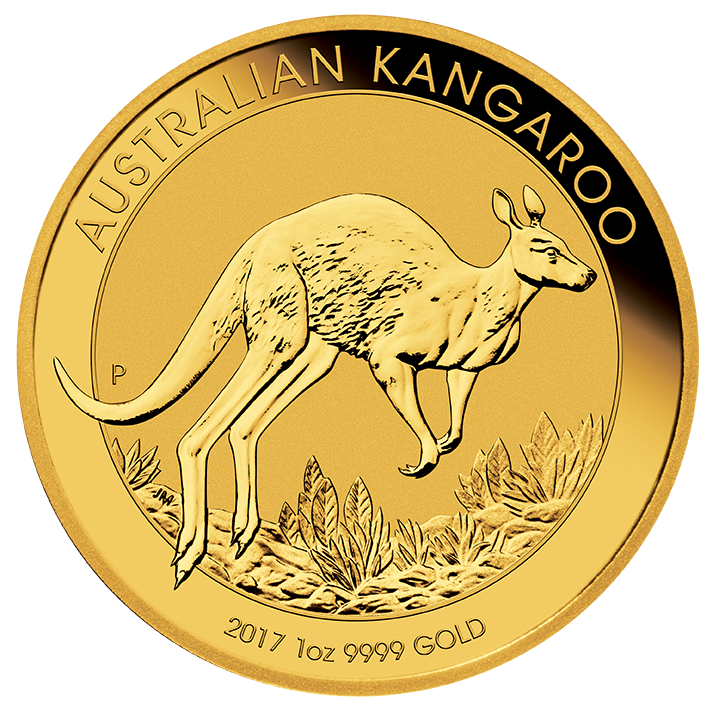 The 2017 1oz Australian Kangaroo gold coin is the current bullion coin of the kangaroo/ nugget series, which was introduced in 1986. The coin has become one of the best-selling gold bullion products in the world.

The coins beautiful designs are just as popular among collectors and investors alike. The Kangaroo has a high purity level of 999.9/ 1000, making it a 24 carat gold coin.

The Kangaroo is a national symbol of Australia. It achieved official national recognition with its inclusion on Australia “coat of arms” in 1908. It is said that this animal was chosen to symbolize a country moving forward because the Kangaroo can’t move backwards.

Gold is a “soft” metal and as a result 24K gold coins are susceptible to surface scratches. It is therefore recommended to keep the coins in their protective cases.

The history of the "Australian Kangaroo" goes back to 1986. In light of the ban on South African Krugerrand imports in 1986, the Royal Perth Mint decided to launch its own bullion coin onto the market. The Australian gold rush, captured the interest of the entire country in the 18th century. The “Gold nugget” became a world famous symbol for the Australian gold rush and was chosen as the theme for Australia’s gold coin series.

In 1986, the designs featured famous nuggets that were found on the Australian continent. in 1989 the series was given a new theme, showcasing the kangaroo design. The Kangaroo was deemed to be a more world recognizable symbol for Australia. This was not only a stroke of luck, but a very well planned marketing effort. Animal designs are much more emotional, and therefore investors are more inclined to choose them.

Because of the history of the Australian gold rush, the name "Nugget" was retained when the new design was introduced. From 1989 until 2007, the image of the Kangaroo along with the name "THE AUSTRALIAN NUGGET" were imprinted on the gold coin.

In 2008, the name "Nugget" was removed, and renamed "AUSTRALIAN KANGAROO". Nevertheless, the "Nugget" impressed so many investors worldwide, that the gold coin retains the name to this day.

The design of the Australian Kangaroo gold coin changes annually, so  the current uncirculated design shows the proof version of the previous year.

As you would expect, the 2017 1 oz Australian Kangaroo features a kangaroo design. Furthermore, like all other editions, the knurling is equipped with a grooved edge and embossed rim.

The reverse of the 2017 Australian Kangaroo gold coin depicts a kangaroo hopping along in the outback. Above the design, "AUSTRALIAN KANGAROO" is inscribed along the edge. To the left of the design is the mint mark "P", which stands for the Perth Mint. The date of issue, "2017" is embossed along the bottom rim of the coin, along with the fine weight of “1oz” and the purity of "9999", plus the designation "gold".

On the front of the coin the image of Queen Elizabeth II is featured. Her majesty is predominantly depicted on the front of the Kangaroo each year. Under the design, the initials of the artist, "Ian Rankbroadley", who produced the portrait of the Queen, can be seen. The inscriptions around the outer edge reads "ELIZABETH II", the country "AUSTRALIA" and the denomination “100 Dollars”.

The advantages of the 2017 1 oz Australian Kangaroo are that it is one of the purest gold coins available on the market. Additionally, it has excellent global brand recognition. As a result the coin can easily be bought and sold at most precious metals dealers around the world.

A disadvantage is the low scratch resistance, due to the softness of gold, which would occur from removing the 2017 Kangaroo from its protective packaging too often.

Below is a summary of advantages and disadvantages of gold bullion coins.

Features of the Series

The Royal Perth Mint is a former branch of the British Royal Mint. The Perth Mint was founded in 1896 and is one of the most storied mints in the world. The English Sovereign Gold coin is considered to be one of its most famous products, which was coined in 5 other countries around the world as well as Australia. Other Sovereign mints in Australia were Sydney and Melbourne.

When purchasing gold coins it is important to select a reputable precious metals dealer that has a wide selection of bullion products. One of the important buying considerations is the surcharge which is also known as the “premium”.

The surcharge or “premium” is made up of the costs and margin of the mint as well as the precious metals dealer.  As a result, the price of the 2017 Australian Kangaroo may vary depending on the dealer.

It should also be noted that the additional cost may depend on the edition of the coin. Current Australian Kangaroo coins such as as the new 2017 vintage are generally offered at a higher premium as the coins are brand new and “uncirculated”.

Further to this, if you are considering purchasing smaller Kangaroo coins under 1 oz, it should be noted that the smaller the weight the higher the premium.. The reason for this is the additional expenditure in production.  For the same quantity of gold, a 1/10 oz gold coin must be minted ten times more than a 1 oz Kangaroo gold coin.

The 2017 1 oz Australian Kangaroo meets all the conditions to be classified as an official gold bullion coin. The following paragraph notes all the necessary criteria leading to exemption from VAT. In Germany, the paragraph § 25c UStG (VAT law) governs.