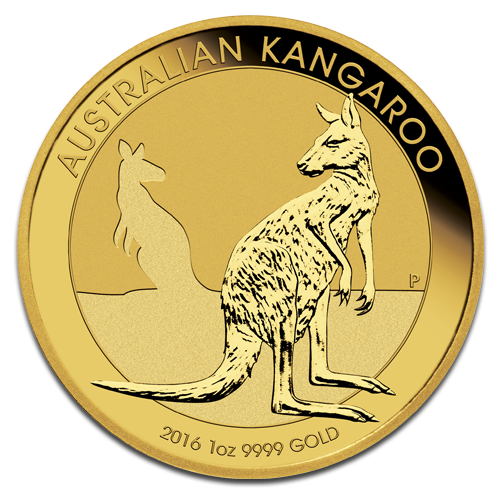 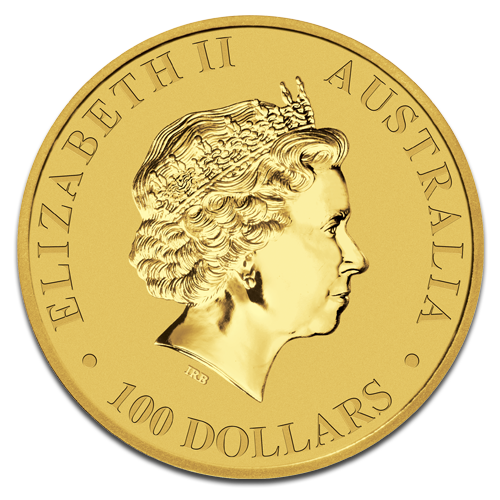 The 2016 1 oz Australia Kangaroo gold coin is the current bullion coin of the Kangaroo / Nugget series, which has been produced since 1986. Over the years it has blossomed into one of the best-selling gold bullion coins in the world. Its beautiful designs are just as popular among collectors and investors alike. The Kangaroo has a high purity level of 999.9/ 1000, making it a 24 carat gold coin.

Due to the high purity level of 999.9/ 1000, the 2016 1 oz Australian Kangaroo is considered a 24K gold coin. Made up of almost one hundred percent gold, the gold coin is corrosion-resistant and retains its color even after many years. A negative connotation is of course, that gold is a very soft material and thus is not as scratch resistant as some other metals.

The history of the "Australian Kangaroo" is a little turbulent, so we must go back a bit. In light of the ban on South African Krugerrand imports in 1986, the Royal Perth Mint decided to launch its own bullion coin onto the market. The Australian gold rush, which CAPTIVATED the entire country in the 18th century, became the theme of the series. Since 1986, the designs featured famous nuggets that were found on the Australian continent. Unfortunately, although beautifully made, the series and the designs did not result in resounding success, and in 1989 the series was given a new theme, showcasing the kangaroo design. This would prove not only to be a stroke of luck, but was very well planned from a marketing perspective. Animal designs are much more emotional, and therefore investors are more inclined to choose them.

The design of the Australian Kangaroo gold coin changes annually, so  the current uncirculated design shows the proof version of the previous year.

The 2016 1 oz Australian Kangaroo features a simple kangaroo design. Furthermore,  like all other vintages, the knurling is equipped with a grooved edge and embossed rim.

The reverse of the 2016 Australian Kangaroo gold coin is illustrated with a simple design, showing the kangaroo turning towards an outline of its own shadow, or another kangaroo. Above the design, "AUSTRALIAN KANGAROO" is inscribed along the rim. Just to the right of the design is the mint mark "P", which stands for Perth Mint. The date of mintage, "2016" is indicated along the bottom rim of the coin, along with the fine weight and purity value "9999", plus the designation "gold".

As with Commonwealth gold coins, the obverse changes only when the representation of the Regent is updated, or when a new King/ Queen ascends the throne in the United Kingdom. Queen Elizabeth II is featured this year. Her profile is shown to be wearing a tiara and earrings. Under the design, the initials of the artist, "Ian Rankbroadley", who produced the portrait of the Queen, can be seen. Furthermore, the name of the regent "ELIZABETH II", the country "AUSTRALIA" and the denomination is featured on the obverse.

The advantages of the 2016 1 oz Australian Kangaroo are that firstly, it is pure gold and the gold coin thus does not corrode. Secondly, it has a relatively small surcharge, as no other noble metals are used and they will be minted in large quantities. A disadvantage that is quite clear is the low scratch resistance, due to the softness of gold, which would occur from removing the 2016 Kangaroo from its protective packaging too often. Please see the summary for further advantages and disadvantages of gold bullion coins.

The special features of the series

+ Since 2008, the official name has been "Australian Kangaroo"

+ The largest gold coin in the world is the "Red Kangaroo" and comes from the same series, weighing 1 ton.

The Royal Perth Mint is a former branch of the British Royal Mint. The foundation stone was laid in 1896, and it began operating three months later. The Sovereign is considered to be one of its most famous products, which was coined in 5 other countries around the world as well as Australia. Other Sovereign mints in Australia were Sydney and Melbourne.

As with all other gold bullion coins, there are also things to consider when purchasing the 2016 1 oz Australian Kangaroo, in order to obtain maximum value for money. The surcharge is particularly important to consider, which can vary due to several conditions.

The surcharge on THE gold price has meant that the cost of a 2016 1 oz Australian Kangaroo has increased by up to 5%. The surcharge is made up of the minting costs, charged by the minting site. Furthermore, the surcharge contains the premiums levied by the seller. For this reason, the price of the Australia Kangaroo may vary from provider to provider.

It should also be noted that the additional cost may depend on the vintage and the maintenance rate. Current Australian Kangaroo coins such as as the new 2016 vintage are generally offered at a higher surcharge as the coins are "fresh from the mint". Further to this, if you are considering purchasing smaller Kangaroo coins under 1 oz, it should be noted that as the weight falls, the premiums will rise. The reason for this is the additional expenditure in production.  For the same quantity of gold, a 1/10 oz gold coin must be minted ten times more than a 1 oz Kangaroo gold coin.

The 2016 1 oz Australian Kangaroo meets all the criteria to be classified as gold bullion coin. The following paragraph notes all the necessary criteria leading to exemption from VAT. In Germany, the paragraph § 25c UStG (VAT law) governs.