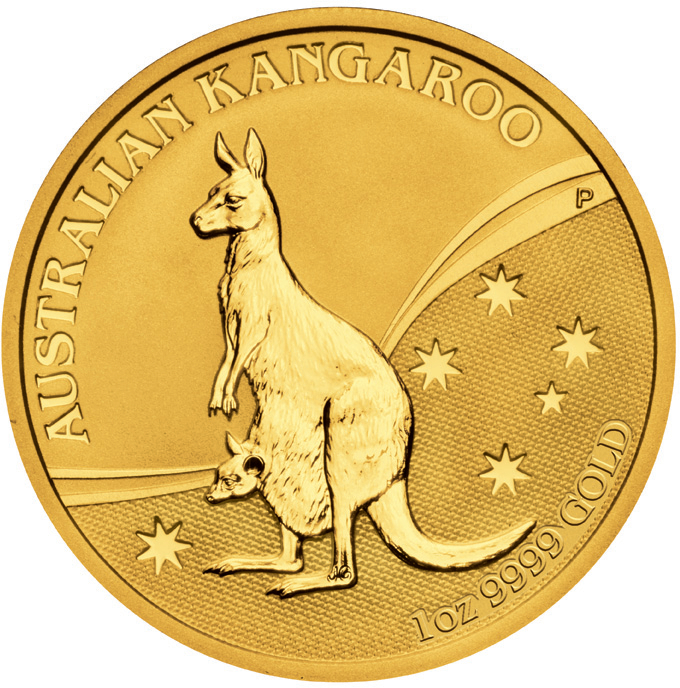 The Australian Kangaroo is one of the best-selling gold products in the world. The yearly changing images on the coin makes them popular with collectors and investors alike. Published by the prestigious Australian, Perth Mint, it is one of the oldest and most recognisable mints in the world. It produces some of the purest gold and silver bullion products available on the market. The mint was originally founded in 1896 as a branch of the British Royal Mint. They first published the Gold Nugget in 1986 due to the South African Krugerrand import ban. The coins initially depicted images of iconic gold nuggets discovered on the continent.

All coins are packaged individually in a durable acrylic case to protect it from rough handling. To underpin the supplementary collectability of Australian gold bullion coins, a maximum mintage is declared for nominated sizes at the beginning of each year. The 2009 coin has a mintage of 298,016 coins.

This 1 oz coin features a mother kangaroo sitting, facing right, with a joey in her pouch. In the background are five stars, in the Southern Cross formation. In front of the kangaroo is the seven pointed commonwealth star. An image designed Dr Stuart Devlin - who was a famous Australian artist and metalworker. Inscribed around the edge of the coin is ‘The Australian Nugget’ Along with the year, and denomination, and purity.