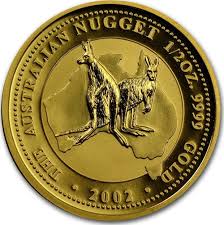 A millennium coin, this the 2002 1/2oz Gold Kangaroo from Australia. From their oldest mint, the Perth Mint. They are known for producing some of the finest gold coins in the world.

The Gold Kangaroo was originally known as the “Gold Nugget”. The first design of the coin featured images of gold nuggets from 1986-1989. In 1989 the design changed to depict Kangaroo’s which were deemed to be a more world recognised symbol of Australia.

This 1/2oz coin is struck with two Kangaroos sitting on the outline of the Australian continent representation. The image was designed by  Jovan Radanovich. Inscribed around the edge of the coin is ‘The Australian Nugget’ along with the year, and denomination, and purity.