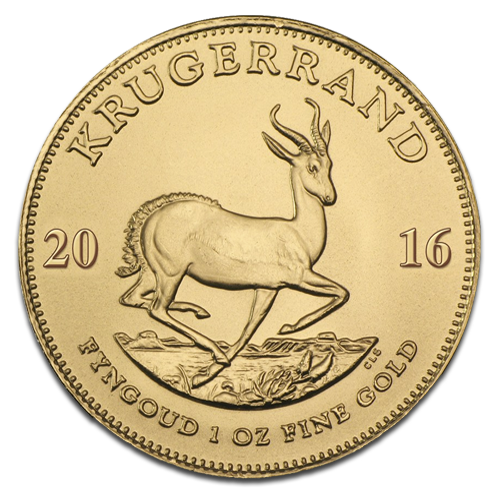 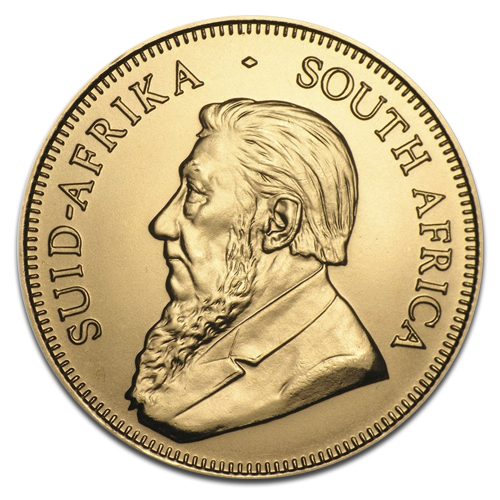 The Krugerrand is probably one of the most famous and also the most successful investment gold coin in the world. The 2016 Krugerrand 1 oz is the latest bullion coin of the South African Mint. It has 22 karats with a fineness of 917/1000.

The gold alloy consists of 91.66% gold with 8.34% of copper. This is a classic 22K red-gold-alloy, which is also used for the English Sovereign. The advantage of this alloy is a higher scratch resistance. Coins that do not have the same hardness of the Krugerrand and get scratched over the years often have to be melted down. From 1967 to 1979 Krugerrand gold coins were produced exclusively in the one ounce size. In 1980 fractional weights of ½ oz, ¼ oz and 1/10 ounce were introduced and made available for purchase.

As demand is extremely high, Krugerrand gold coins are minted in high volumes every year. Since 1967, the Krugerrand 1 oz differs only by the year on the back of the coin. In 1980, smaller coin weights were also introduced. Some years certainly have a higher value, as smaller numbers were produced.

Front and Back of the Coin

On the front of Krugerrands the profile of Paul Kruger can be seen. Stephanus Johannes Paulus Kruger was President of the South African Republic from 1882 to 1902. On the left side next to Paul Kruger, is the word "SUID AFRIKA", on his right the words "SOUTH AFRICA". The design of the motif comes from Otto Schultz from the year 1892.

On the back there is the portrait of a springbok antelope, which is the South African national animal. Furthermore, the word "KRUGERRAND" is shown (fractional coin weights show the size in ounces before the word). Left and right of the springbok antelope the year of coinage can be seen. On the bottom areas the words "FYNGOUD 1 OZ FINE GOLD" are embossed. The reverse was designed by Coert Steynberg in 1967.

History of the Krugerrand Gold Coin

The first issue of Krugerrands was on 3rd July 1967. The 22K gold-copper alloy was chosen because the proportion of 8.33% copper results in a better scratch resistance. The English Sovereign was regarded as a model for the Krugerrand.

In the first two years after the introduction, only about 30,000 to 50,000 gold coins were minted annually. These figures increased up to 2 to 6 million units in the time from 1974 to 1984. The reason for this high mint output was linked to the ongoing oil crisis. Krugerrand imports to the US and Europe were banned in 1986 because of the embargo against South Africa.

Ownership or trading was not prohibited at this time. The embossing volumes decreased significantly to a low in 1995. At this time only 8285 1 oz Krugerrand units were minted. In addition, 1995 is the year with the smallest circulation. In 1999, the ban on imports was abolished, resulting in a steady increase in annual sales.