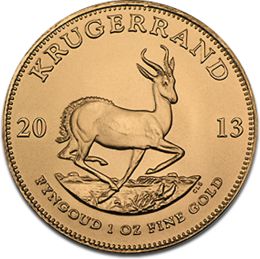 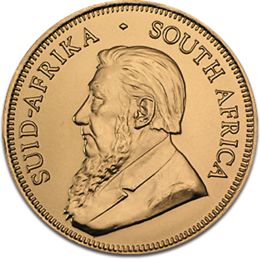 The Krugerrand gold coin does not have a denomination on the coin but is legal tender in South Africa. The value of the Krugerrand is founded in the content of pure gold which is 31.10 grams for the 1oz coin. This makes trading of the Krugerrand very easy. The Krugerrand was the first mass produced denominated bullion coin ever and since then many other countries were inspired to mint their own investment coins as well.

Design and Production of the Krugerrand Gold Coin

Obverse shows the Paul Kruger president in the time from 1882 until 1902 of South Africa. Paul was a son of German immigrants and loved nature and animals. He had 16 kids with his second wife Gezina du Plessis after his first wife died of malaria with his first child.

Inverse shows the Springbok the national animal of South Africa. The front was designed by Otto Schulz and inverse by Coert Steynberg.

The Krugerrand is minted in Germiston only a few miles south of Johannesburg in two qualities: Proof and Mint state.

The inscriptions of the Krugerrand gold coin:

Where to buy the 1oz Krugerrand Gold Coin?

The popular 1oz Krugerrand gold coin can be best bought online at best price here with us on www.CelticGold.eu.