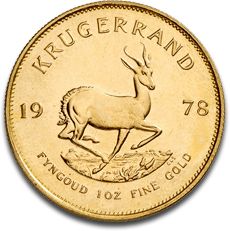 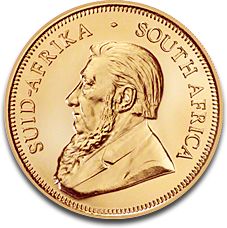 Krugerrand gold coins are one of the most traded and minted coins in the world. Especially the first mintage years trade today higher than the gold price with a collector’s value.

The 1oz Krugerrand gold coin has a fine weight of 31.10 grams which means the coin contains exactly one (troy-) ounce of pure gold. The fineness is 916.67/1000 which is 22 carat. Adding 8.34% copper to the coins during the production process guarantees a more scratch resistant alloy. This unique alloy is constant since 1967, the first minted Krugerrand coin ever. The copper-gold alloy give the Krugerrand the unique red-golden look.

+ First the Krugerrand is more durable because of the 8.34% copper content. For example other 24 carat gold coins need to be stored properly in order to protect the coin surface from scratches.

+ The second advantage is the global acceptance of Krugerrands which means the coins are easily traded at the current gold price with banks, bullion companies and private individuals.

+ The third advantage is the direct price reflection of the of the up and down moving gold price. With falling or rising prices investors may react quickly to liquidate or stock up on Krugerrand coins.

+ Last but not least the Krugerrand is by many viewed as one the most beautiful investment gold coins in the world.

From the first year of mintage in 1967 the appearance of the Krugerrand coin is unchanged, only the year and fractional size get adjusted. Fractional sizes are: 1 ounce, ½ ounce, ¼ ounce, 1/10 ounce.

The front shows Paul Krugers profile, he was president of the South African republic Transvaal in the time from 1882 to 1902. To the left shows the inscription “SUID-AFRIKA” and to the right “SOUTH AFRICA”.

The backside of the coin shows South Africans national animal the Springbok-Antilope. Above the antilope is “KRUGERRAND” minted in capital letters. Left and right of the antilope picture shows the mintage is year. The first two number left and the latter two number to the right. Below the national animal the fineweight is minted in curved letters with the info fine gold. With the 1oz Krugerrand the text reads: “FYNGOUD 1OZ FINE GOLD”.

The story of the Krugerrand coins actually started in 1961 well before the first edition of the Krugerrand coin was minted in 1967. Beginning in the year 1961 the first South African gold coins 1 Rand and 2 Rand were minted until 1983. In addition to the 1 and 2 Rand coins the South African Reserve Bank authorised the Krugerrand gold coins on July 3rd 1967 as legal tender. 40,000 coins were minted in the first two years and annual output increased continuously from there on. Peak production was reached in 1978 with over 6 million 1oz Krugerrands but in 1986 the coins went into a crisis as the US and Europe import banned the coins. The import ban lasted until 1999 and the annual mint output was on the rise again but the old record numbers were never reached again.