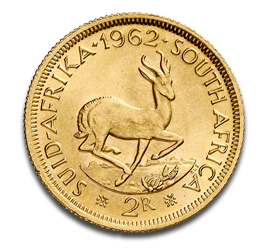 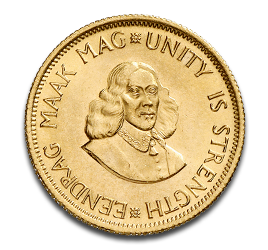 2 Rand gold coins were minted from 1961 to 1983 in South Africa. They are exactly the same 22k alloy as the Krugerrand and therefore have good scratch resistance.

Produced by the South African mint, the design of the 2 Rand Gold coin portrays the early history of South Africa. South African Gold coins are some of the most popular and most recognized gold coins in the world.

2 Rand Gold Coins have a fine content of 917/1000 and the fine weight is 7.32g. The alloy consists of 91.7% gold and 8.33% copper. Rand gold coins have a golden reddish color which is due to the copper content. Over time the naturally bright orange-reddish appearance turns towards a darker red color due to corrosion.

The South African 2 Rand Gold coin has the same dimensions as the English Sovereign.

South African 2 Rand gold coins have an edge bar and a rippled edge. The front depicts a Springbok antelope which is the national symbol of the South African Republic. The same motif is also found on the most famous gold coin in the world - the Krugerrand.

The inscription on the edge-side reads: “Suid-Afrika - South Africa 2R”. The year of mintage is imprinted above the motif.

On the back is the portrait of Jan van Riebeeck, who was the Dutch doctor and businessman who founded the Cape Colony (Cape Town). The inscription on the edge is "Unity is Strength" and in African "Eendrag Maak Mag".

The 1 Rand and 2 Rand gold coins were minted in South Africa from 1961 to 1983. The Rand Gold coins preceded the Krugerrand, which was manufactured from 1967 onwards.

One can say that the smaller 1 and 2 Rand Gold Coins were replaced by the fractional Krugerrand coins. Both of these coins were legal tender in South-Africa.

The South African Rand coins are based on the English Sovereigns, which were first minted as circulation coins with the nominal values ​​of 1 Pound and ½ Pound (full and half sovereign) in 1817.