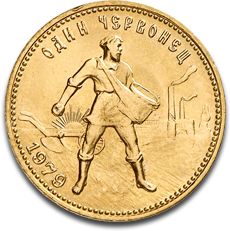 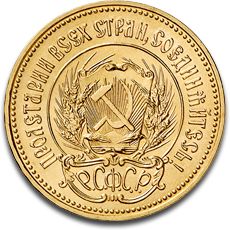 The gold coins were originally minted in the years 1923 and 1925; But the majority of today’s traded investment coins were in minted from 1975 to 1982.

Chervonets are a former currency of the Russian Empire and Soviet Union.

The coin has a reddish tint due to the 10% copper content. Because of the gold/copper alloy, the Chervonetz gold coin is durable and has good scratch resistance. It has a fine content of 900/1000, with a fine weight of 7.74g.

The main motif on the front shows a farmer sowing seeds. In the background is a plow, an industrial plant and the rising sun. The inscription consists of the embossing year below the motif and the nominal value above the motif: "один Червонец" which means "10 Chervonetz".

A hammer and sickle are the main motifs of the back. In the background a corn corpuscle can be seen before a rising sun. The inscription on the margins reads: "Пролетарии всех стран, соединяйтесь!" (Proletarians of all countries unite). Below the coat of arms the words "PCOCP" are embossed.

The majority of today’s available Russian investment coins are the Chervonetz gold coins from the years 1975 to 1982. The Soviet Union minted and sold the 10 Ruble Chervonetz to bring foreign exchange reserves into the country. They were originally not intended for national trade.

Well preserved Chervonetz coins from the year 1923 can have a collector’s value today. The total circulation amounted 2.75 million pieces of the year 1923.