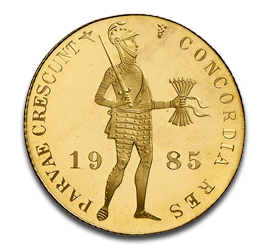 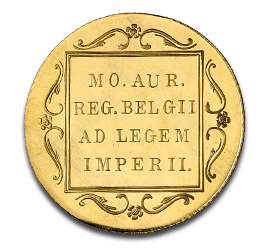 The Dutch Ducat is one of the oldest gold coins in the world and dates back to 1583. What is remarkable is that the design has remained largely unchanged from its first year of minting.

In the late 16th century, Amsterdam was becoming a prosperous European business center and a high quality, well accepted gold coin was needed for commerce. As a result, the Gold Ducat became the standard “trade” coin used for business transactions across the Netherlands.

The front side of the coin shows a knight holding a sword in his right hand and a bundle of arrows in his left hand. The inscriptions around the outer edge are in Latin and translate “Power through Unity”. The date of issue is engraved on either side of the knight.

On the reverse side is an ornamental wreath that surrounds the coin. In the center is an abbreviated Latin inscription that translates “Gold Coin of the Kingdom of the Netherlands by Law of the Empire”.