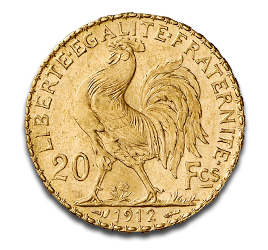 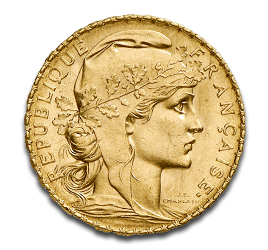 The "20 Francs Marianne" was coined in between 1899 and 1914. All 20 French Francs gold coins have a fineness of 900/1000. These coins have a rich history and are popular amongst both investors and collectors.

Due to the high copper content, the "20 Francs Marianne" has a distinctive golden reddish color. Bullion coins that are minted with a copper alloy can change color as the years pass. The natural color of copper turns from bright red (clipped copper) to dark red because copper corrodes over time. As part of the coins unique design, the knurling along the outer edge has an unusual and distinctive pattern.

The front shows the image of "Marianne", which is considered a national symbol of the French Republic. In the presentation she wears a Phrygian cap and laurel wreath on her head. Below the motif directly on the neck, the initials of Jules-Clément Chaplain can be seen, the creator of the portrait. Around the edge République Française can be read.

The design of the back is a Gallic rooster, walking on a flower meadow. The year of issue is embossed below the motif and to the right and left the nominal value is specified. The marginal inscription is "Liberte Egalite Fraternite", which means: Liberty, Equality, Fraternity - and is the motto of the French Republic.