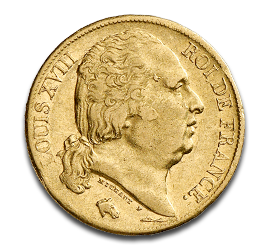 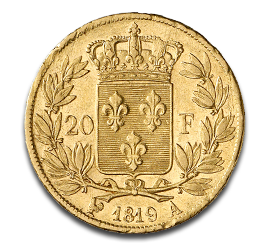 20 Franc Louis XVIII gold coins were issued with two different designs. The first design, which we profile here, was released in 1814 and 1815 during the first restoration of the French Monarchy under King Louis XVIII.

Napoleon made a brief return to Paris from exile on Elba Island in March of 1815. However, he was defeated approximately 3 months later at the battle of Waterloo. Louis XVIII took the throne again in July of 1815 to restore the French Monarchy for a second time.

The front side of the coin depicts a right side portrait of King Louis XVIII. The inscriptions around the outer edge read “LOUIS XVIII ROI DE FRANCE”. The engraver was Pierre-Joseph Tiolier.

The reverse side depicts the French coat of arms. The lettering around the outer edge is “PIECE DE 20 FRANCS”. The date of issue is below the portrait of King Louis XVIII.