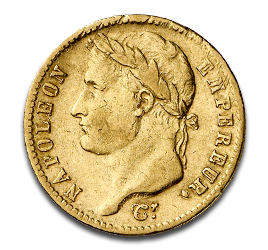 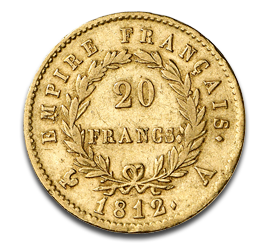 The 20 Franc Napoleon I gold coin was first authorized in 1803 and became the standard for all coins of the Latin Monetary Union that circulated Europe until 1914. The 20 Franc gold coin became so famous under Napoleon, that the coin was referred to as “Napoleon’s” even when minted under other rulers.

Early editions of the 20 Franc Napoleon are very rare. The coins we profile here were issued from 1809-1814.

The front side of the coin depicts a left profile view of Napoleon wearing a laurel wreath on his head. The laureate head symbolizes military power. The inscription around the outer edge reads “NAPOLEON” and “EMPEREUR”.

The reverse side of the coin depicts a wreath as the main motif. Inside the wreath is the nominal value. The year of issue is on the bottom of the coin. The engravings on the top outer edge are “EMPIRE FRANCAIS”.