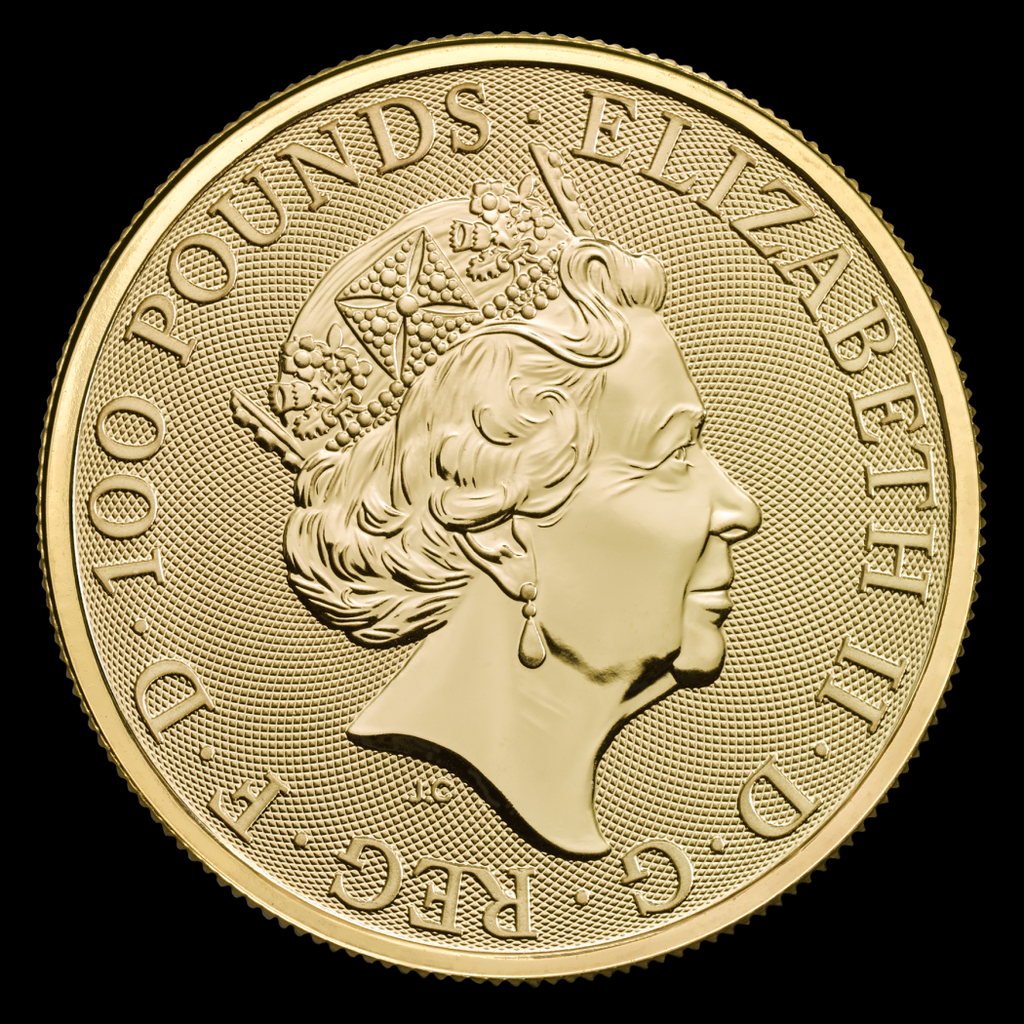 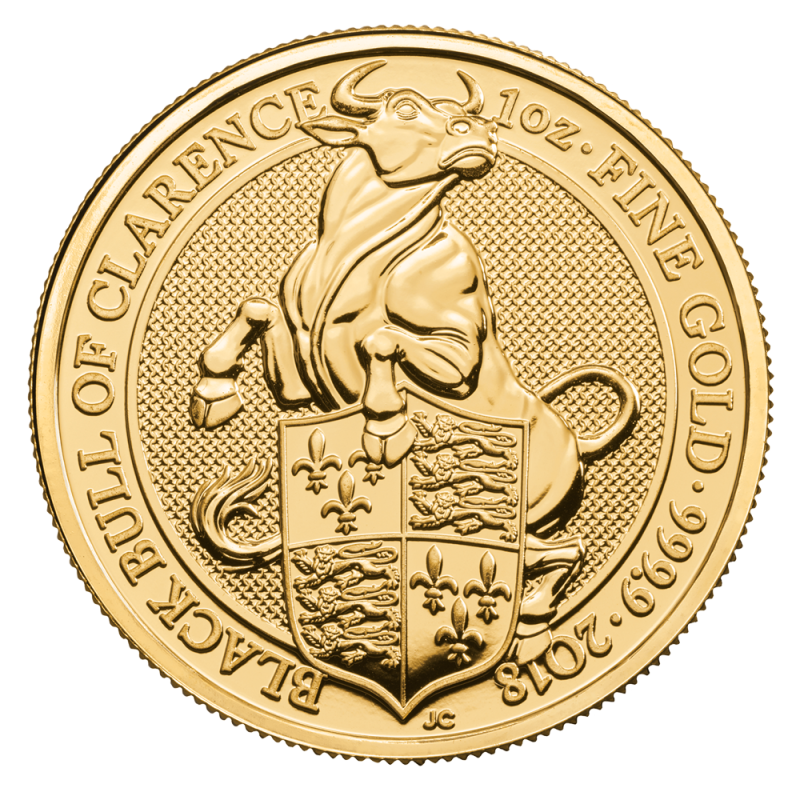 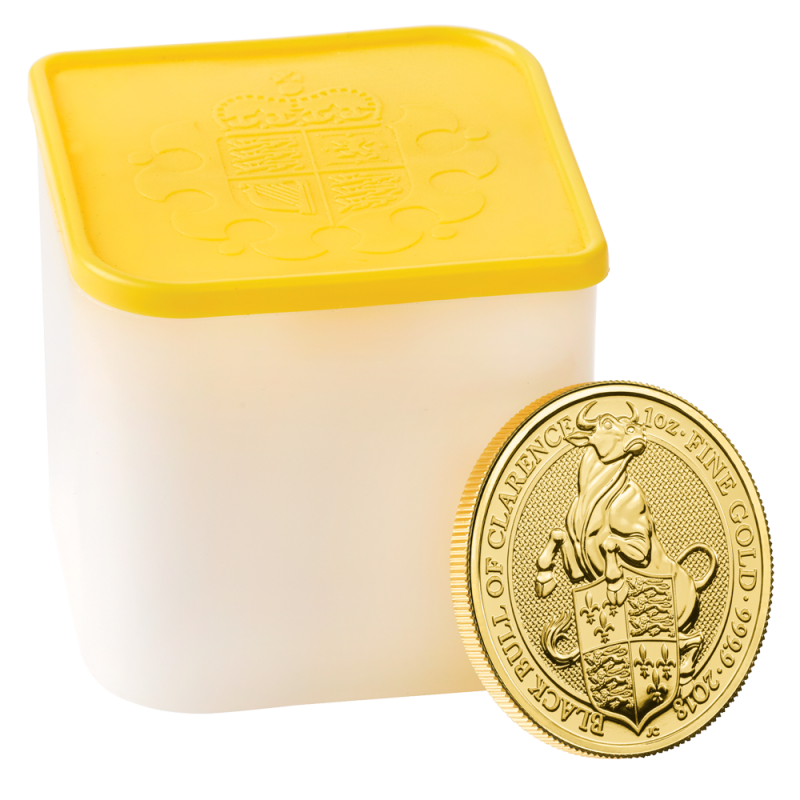 The fifth 1oz gold coin of the 10-part Queen's Beasts series, the "Black Bull of Clarence" is available. The Queen's Beasts Gold Series is issued by the prestigious Royal Mint. These unique coins have high appreciation potential and are therefore popular with both investors and collectors.

Each of the statues shows a heraldic animal with a shield. The coat of arms or badge on the shield shows the connection to the ancestry of the Queen. Each of these families is involved in the development of the United Kingdom.

The heraldic statues were created in 1953 on the occasion of the coronation of Elizabeth II. They stood in front of the western extension of Westminster Abbey.

The bull is one of the most English and "earthy" of heraldic symbols and is associated with courage, transformation and passion. This could be the reason why Edward IV. chose the bull as his heraldic symbol.

The Black Bull of Clarence shows how determined Edward IV was to continue his royal lineage. He was the first king of England from the House of York and a significant figure in the "Rose Wars". The war of the roses was the conflict between the rival houses of Lancaster and York, which had been contending for the throne. In 1461, Edward IV took power from Henry VI, overturning a troubled Lancastrian rule. The first part of Edwards rule was marred in violence with the War of the Roses.

Edwards lost the crown for a brief time to Henry VI in 1470. However, Edward recaptured the throne and defeated the Lancastrian forces again in 1471 at the battle of Tewkesbury. Henry was imprisoned and executed in the Tower of London. The victory at Tewkesbury brought political stability to England until Edwards death in 1483.

After Edward's death, his brother Richard III followed him to the throne, and was defeated in 1485 at the Battle of Bosworth by Henry Tudor. Henry married Edward's daughter Elisabeth to finally finish the Rose Wars. The Tudor rose has both red leaves - the color of the house Lancaster - as well as white for the symbol of the house York.

The following statues are available:

The lion of England

The Griffin of Edward III

The falcon of the Plantagenets

The black bull of Clarence

The yale of Beaufort

The white lion of Mortimer

The White Greyhound of Richmond

The red dragon of Wales

The unicorn of Scotland

The white horse of Hanover

The motif page of the Queen's Beasts "Black Bull by Clarence" shows an erect bull with a shield that depicts the arms of the monarch houses Lancaster and Tudor. The shield shows three white lilies in the upper right and lower left as a symbol for the claim on the throne of France. In the upper left and lower right three superimposed lions are depicted, the symbolic animals of Richard the Lionheart.

The background of the motif, as with the previously issued coins of the series, show  filigree intertwined limbs, reminiscent of a chain mail from the armed forces.

The border features a smooth edge area, which separates the motif from the edge bar. The upper and lower part of the motif partially protrudes the edge bar. The inscription reads: "Black Bull of Clarence" • 1oz • Fine Gold • 9999 • 2018 • JC ". The initials "JC" stand for Jody Clark, who designed the motif page of The Queen's Beasts Gold Coins.

The reverse side depicts Queen Elizabeth II as a motif. The background consists of a rough grained surface, which is very unusual for a coin. The marginal label reads "Elizabeth II • D • G • Reg • F • D • 100 Pounds".