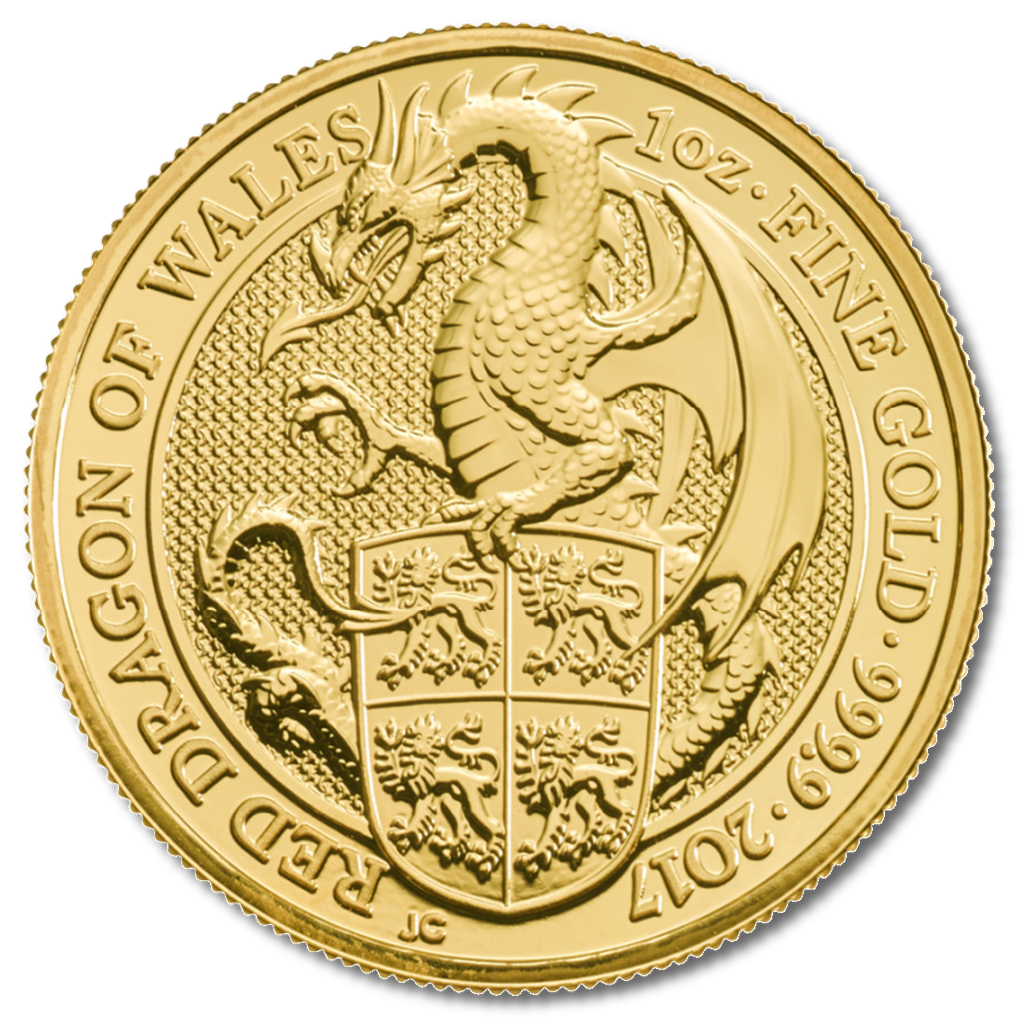 The Queen's Beasts gold and silver coin series was launched in 2016.  "The Dragon of Wales” is the third edition of the popular 10 coin series by the Royal Mint. The series will run from 2016-2021 and depict each one of the Queen’s Beast’s statues that were present at the coronation of Queen Elizabeth II.

The Queen’s Beasts bullion coin series takes its inspiration from hundreds of years of royal heraldry and is popular with both investors and collectors.

The Queen's Beasts Dragon Gold coin 2017 is pure 24 karat gold with a fineness of 999.9/1000. The high level of purity makes the coin particularly sensitive to scratches, so it is recommended to keep the coin in its protective cover to protect it from damage. The gold coins are issued in 1 oz and ¼ oz.

The motif side of the gold coin depicts the "Red Dragon of Wales". In front of the dragon, a shield with the coat of arms of Prince Llywelyn of Wales is shown.

The coat of arms can be seen on the statue of Llywelyn Fawr in Conwy, North Wales. It shows four individual lions on four fields. Llywelyn from Iorwerth was Prince of Gwynedd in North Wales. He ruled Wales for forty years.

For this reason he is called Llywelyn I of Wales and is one of only two Welsh rulers, who were nicknamed "the Great" (Welsh: Llywelyn Fawr). The background of the motif is interwoven filigreed links which refers to a chain shirt that was worn for protection during wars.

The writing is located around the outer edge and separates the motif from the edge bar. The inscription reads: "Red Dragon of Wales • 1oz • Fine Gold • 9999 • 2017". The initials "JC" are embossed underneath the coat of arms and stand for Jody Clark who designed the motif side of the Queen's Beasts 2017 Dragon.

The value side of the gold coin shows a portrait of Queen Elizabeth II. It is the fifth official portrait of her majesty by the Royal Mint and has been used since 2015. The portrait was also designed by "JC" - Jody Clark. The coin background is covered with numerous point-like elevations.

The Royal Mint launched "The Queen's Beasts" gold and silver coin series at the beginning of 2016. The series is named after the 10 "Queen's Beasts" statues that were created in 1953 on the occasion of the coronation of Queen Elizabeth II.

Sculptor James Woodford designed the statues according to the coat of arms animals of her majesty’s heritage. The statues are about 1.83 m high and cast out of plaster. The other motifs of the series will also deal with the British heraldry.

The Griffin of Edward III (the Griffin Edwards III) (2017)

The Black Bull of Clarence

The Unicorn of Scotland

The legend of the red Welsh dragon says that King Vortigern wanted to build a castle at Dinas Emrys. However every night the castle walls and foundation are destroyed by unseen forces, so he asked for a wise old man for help. He thought that he was to sacrifice a wise boy. But the child, later to be known as Merlin, told the king to dig a deep hole beneath the castle, as the castle stood on the swamp.

The Royal Mint, the official mint of the United Kingdom, and has more than 1100 years of history. The Royal Mint is the manufacturer of the Sovereign, which is one of the most famous gold coins in the world. Since 1980, the Royal Mint has been located in Llantrisant, South Wales, 20 km northwest of Cardiff.