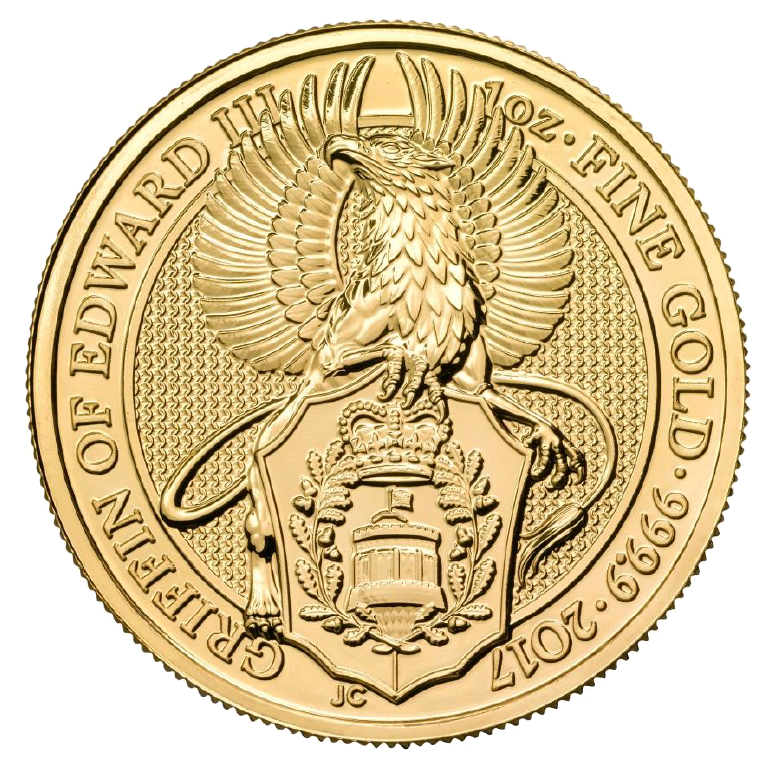 The second edition of the Queen's Beasts 2017 1oz Griffin Gold coin is available. The 2017 "Queen's Beasts" is called "Griffin of Edward III". The Queen’s Beasts bullion coin collection will feature a total of 10 designs through 2021.

Published by the renowned Royal Mint, one of the oldest mints in the world, the 2017 Queen’s Beasts Griffin commemorates the rich history of the British Monarchy. These beautifully designed coins are suitable for both investors and collectors.

Many English and British queens and kings chose certain symbols which represented their reign and character. The griffin was one of the symbols that Edward used as a sign of his far-sightedness and leadership. The griffin is a mythical creature with the wings, fore-legs, and head of an eagle, and the body of a lion. The griffin is a combination of the king of birds and the king of the birds of prey.

The name "Queen's Beasts" is a term used mainly in the United Kingdom and goes back to the year 1953. With the coronation Elizabeth II, ten heraldic statues were created, with the name "The Queen's Beasts". They are supposed to represent the genealogy of queen Elizabeth II. The 1.83 cm statues were made by the sculptor James Woodford (1893-1976).

The following are the names of the statues that were created:

The lion of England

The motif side of the Queen's Beasts 2017 shows the "Griffin of Edward III". In his claws, the Griffin holds a shield of the Windsor Castle. The castle was the office of Edward III and today is home of the British royal family.

Above the building is the banner and the royal crown. On the left and right the tower is framed by a seal. The background of the motif consists of chains that are intertwined (as it was customary with a chain shirt).

The writing is located in a smooth area on the edge, which graphically separates the motif from the edge. The upper and lower part of the motif extends into the writing on the outer edge of the coin.

The inscription is: "Griffin of Edward III • 1oz • Fine Gold • 9999 • 2017”. The initials "JC" are embossed underneath the coat of arms, which stand for Jody Clark who designed the motif side of The Queen's Beasts 2017 gold coin.

The back shows the image of Queen Elizabeth II. The background is a rough grained surface, which is very unusual for an investment coin. The inscription on the edge is "Elizabeth II • D • G • Reg • F • D • 100 Pounds".