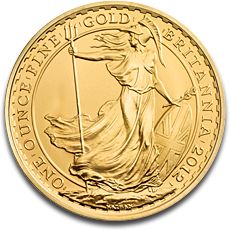 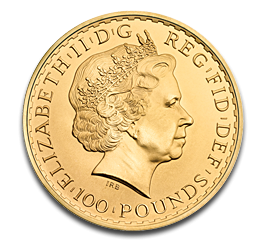 The British Britannia 1oz is produced by the Royal Mint and since 2013 has a fineness of 999.9/1000. The different year Britannia gold coins have previously been in circulation. We do not have an influence on the years or fineness. As each Britannia contains 1 oz of pure gold, it’s a recognized gold bullion coin and therefore exempt from VAT.

The Britannia 1oz gold coin has a fine weight of 31.103 grams. The diameter and thickness can vary with the different editions. The face value is always 100 Pounds and is legal tender in the UK. The issue of legal tender coins is reserved only to government-authorized mints. Since the year 2013, the Britannia has had 24 karats, with a fineness of 999.9/1000. In the years from 1987-2012 the Britannia was embossed with 22 karat and a fineness of 916.67/1000. The alloy components in the years 1987-1988 were gold and copper. From 1999, silver was also added as an alloying component and the proportion of copper was minimized. The copper/silver ratio was 50/50.

In 1987, the Britannia gold coin was introduced to the market by the British Royal Mint. This corresponded to the import ban on Krugerrands, which happened 1 year earlier. It turned out that the decision by the Royal Mint to introduce the Britannia was right, as the demand for gold bullion coins continued to be very high. In the 1970’s and early 1980’s the Krugerrand dominated the gold coin investment business as there were very few bullion coins on the market. At the time, the Sovereign, which is also minted by the Royal Mint, was one of the few alternatives to the Krugerrand. The Sovereign was a typical legal tender coin used in circulation. With the abolition of the gold standard, the Sovereign almost automatically became a bullion coin.

The Britannia 1oz has has a rippled edge and an edge bar. The design of the front is the "Britannia" and on the back the profile of "Queen Elizabeth II" is portrayed. The edge bar has the function to protect the motif against wear and to ensure good stackability. This is made possible because the edge bar is higher than the motif. Furthermore, any manipulation of the coin can be spotted at first sight through the very fine structure of the edge bar and the corrugated edge.

The design of the front is the "Britannia", the female symbol of the British Channel Islands. The Britannia is pictured in several different views that change with the annual editions in irregular intervals. This is a rather unusual feature for the front of gold coins, since the motif remains the same, for example as with the Krugerrand, Maple Leaf and Vienna Philharmonic gold coins. But then there are gold coin series that change their motive on an annual basis. These include the China Panda, Lunar II and Kangaroo Australian coin series. Nevertheless, the images of the Britannia continuously feature the same details. In most variations the Britannia is wearing a Corinthian helmet. In addition, a trident, laurel branch and a shield with the Union Jack are shown. Furthermore, you can see the Britannia sitting or standing, with horses and chariots, and sometimes with a lion at her side. Displayed on the front is the name of the coin "Britannia", the year, the fine weight "1oz", and fineness, with the label "Fine Gold".

The back of the Britannia gold coin features the profile of "Elizabeth II". British coins show the Regent of the United Kingdom on the reverse. This feature has a long history and is still maintained by former colonies and Commonwealth countries. The portrait shows Queen Elizabeth II in different representations because every few years the appearance will be adjusted. The back of the Britannia 1oz shows the following labels: The name of the regent "Elizabeth II DG" (Dei Gratia - Grace of God), "Reg, Fid, Def" (Queen Defender of the Faith) and the face value "100 Pounds".

Those who are interested in buying gold coins like the Britannia, should learn about the peculiarities of gold, and gold coins. We have compiled the most important tips to help you to make an informed decision below.

What are the Price Components?

The price of the Britannia consists of the current gold price and the premium. Gold is traded on the various world exchanges, perhaps the most important is the "London Bullion Market Association (LBMA)".

The price of gold is subject to the market rules and therefore is constantly changing. A special feature with the LBMA is that two times per day (AM and PM fix) the price of gold is set in various rounds of bids from five selected banks. This gold fixing is carried out by rules that have been in place since 1919. After the AM/PM fix the price of gold will fluctuate freely.

For this reason, the price of Britannia gold coins may change within seconds with all precious metal dealers. Most bullion dealers offer to buy gold online, so a digital price update clock is usually displayed on the website. Different bullion companies have different time intervals, for example 15 min or 1 min, in which a the gold price is updated.

The second essential component of the price of Britannia 1oz gold coins is the premium. The premium consists of the costs of the mint and the margin of the gold seller. The Mint can thus pass on their cost of minting the Britannia 1oz to the seller, plus a margin.

The costs of minting gold coins is quite high. These include the manufacture of blanks (coin blanks), dies, embossing machines, personnel, safety, packaging, storage, transport, etc. The premium also includes costs and the margin of the seller.

What Leads to a Change in the Premiums of Gold Coins?

The premium between the various gold coins varies significantly. First, gold coins like Krugerrands, Maple Leafs or Britannias are produced in different quantities, which then affects the premium. In general, the higher the annual mintage of a gold coin, the lower the premium.

Furthermore, the alloy can change the premium, as is the case with American Eagle gold coins. Other than copper, the American Eagle has 3% silver in the alloy, which results in a slightly higher premium.

But the most important factor is the weight of the gold coins. Weights from 1 oz usually carry a small premium, which is about 3% to 6%. In contrast, fractional gold coins with the weight of e.g. ¼ oz or 1/10 oz can carry premiums of up to 15%.

The reason for this is the additional expenditure for the production of small coins. For the same amount of gold, multiple coins must be produced, packed and transported. For the investor who seeks to pay as little premium as possible, the decision should be 1 oz gold coins.

Next to these general rules, premiums may vary between precious metals dealers. Due to different cost structures and margins, prices should be compared before buying Britannia 1 oz gold coins. So it’s best to choose a reputable seller with a fair premium.

Different alloys in gold coins have various properties. Therefore, you should consider the following criteria: Pure 24 karat gold coins are very soft and therefore sensitive to mechanical influences, resulting in poor scratch resistance. The positive is that these gold coins do not corrode and retain their beautiful golden color. 22 karat gold coins have a fineness of 916.67/1000 with the alloying component copper (and sometimes silver). Copper has a distinct advantage over gold, it is very hard. Therefore, legal tender coins were often made in a 22 karat alloy because the coins could remain in circulation for a much longer period. The disadvantage of copper is of course the corrosion property with its red coloring, for example Krugerrands. The color of the coin is "red-gold", which does not look like a pure gold coin. Furthermore, the copper color of the gold coin will change over the years, getting darker because the copper corrodes.

What makes the Britannia 1oz an Investment Bullion Coin