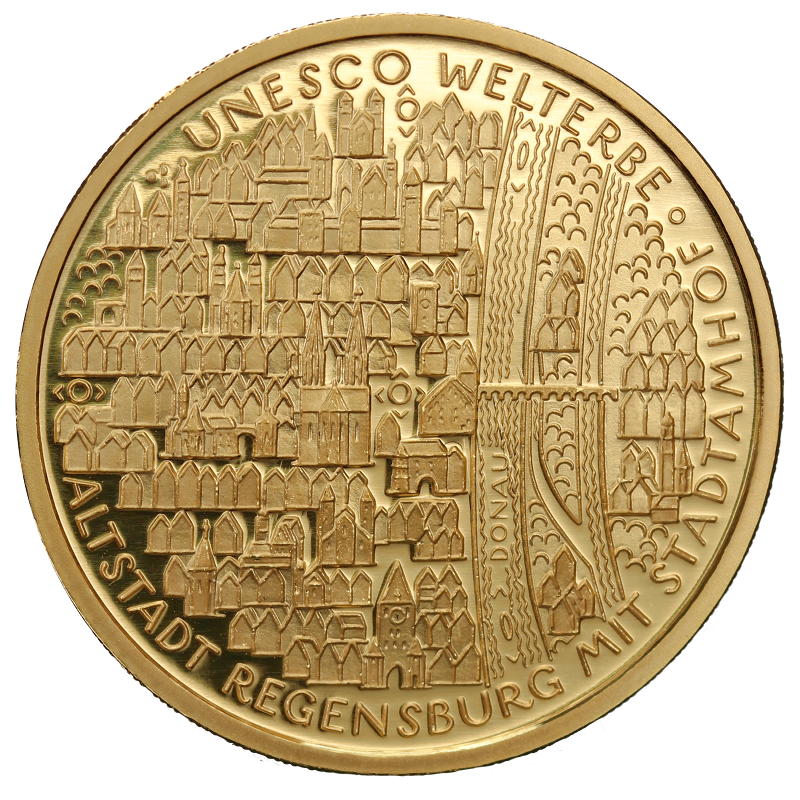 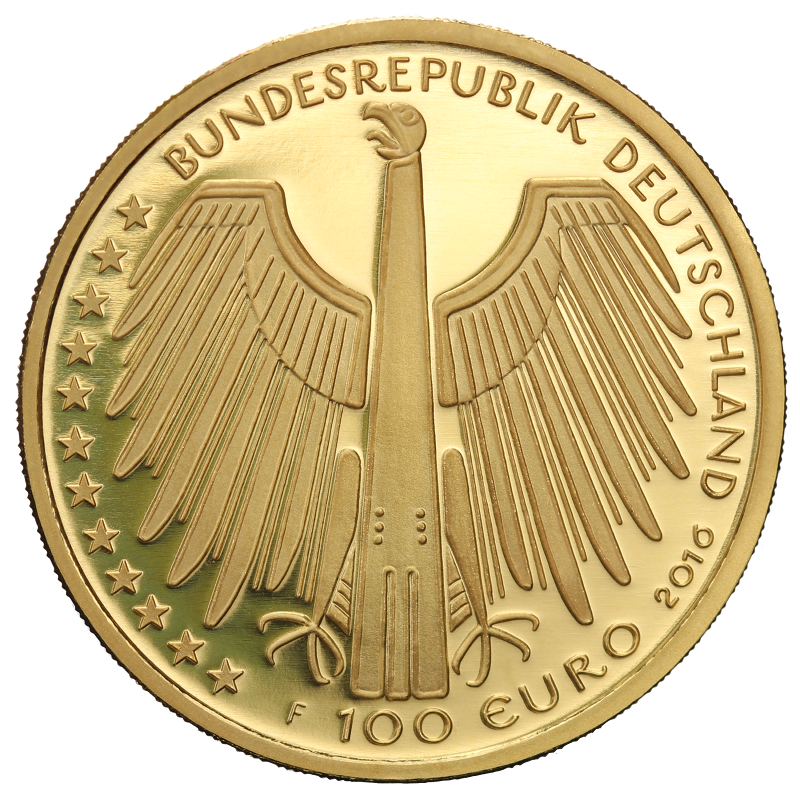 The 100 Euro Regensburg Old Town Gold Coin was introduced in 2016. The medieval center of Regensburg is a UNESCO World Heritage site and represents the cultural significance of Southern Germany during the middle ages. In 2014 Regensburg was one of the top travel destinations for tourists in Germany.

It is the thirteenth Euro gold coin issued by the Federal Republic of Germany with the motif of a German UNESCO World Heritage site. The 100 Euro Old Town Regensburg Gold coin is beautifully designed and suitable for both investors and collectors.

The Gold coins were produced in equal numbers (30,000 pieces) in each of the five German mints in Berlin (A), Munich (D), Stuttgart (F), Karlsruhe (G) and Hamburg (J).

The design was created by sculptor, medalist and coin designer Friedrich Brenner, from Diedorf.

The motif side shows the historical old town of Regensburg from a bird's eye view. The densely impressed view of the houses refers to  more than 1,000 protected monuments in the urban area of ​​Regensburg.

On the right part of the motif, you can see the river Danube from top to bottom. The inscription on the outer edge shows the name of the coin "UNESCO WELTERBE ALTSTADT REGENSBURG MIT STADTAMHOF"

The reverse shows the coat of arms of the Federal Republic of Germany as the main motif. On the left and right of the Federal Eagle, six stars are arranged in a semicircular shape, which represent the European Union.

Directly above the eagle, is the mint mark of the issuing Mint. Surrounding the motif is the inscription “BUNDESREPUBLIK DEUTSCHLAND”, the year of issue 2016 and the nominal value of “100 EURO”.

In the High Middle Ages, Regensburg was a political center of the Holy Roman Empire of the German Nation and a flourishing European trading center. Regensburg suffered little damage by allied bombing attacks during the Second World War. As a result, the collection of original Romanesque and gothic architecture has remained intact since 1945. Regensburg's old town is the only preserved medieval city in Germany.

The public buildings, civic dwellings, crafts houses and the important number of churches, monasteries and foundations provide an authentic picture of medieval urban culture that defined Southern Germany during the middle ages.

In the rich building fabric of Regensburg, there are over 1,500 monuments from many centuries throughout the city. Almost 1,000 of them are represented on the motif of the Old Town Regensburg gold coin.