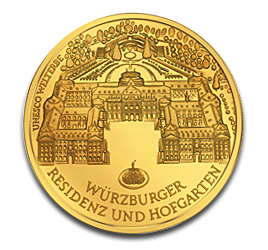 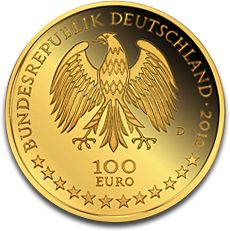 The ninth coin of the official German 100 Euro gold coin series is the 100 Euro Wuerzburg coin 2010. This editions motif of the gold coin is the UNESCO World Heritage "Wuerzburg Residence and Gardens".

Construction of the the Wuerzburg Residences and Gardens began in 1720 and was completed in 1744. Napoleon reportedly called the building the “largest parsonage in Europe”.

The 100 Euro Wuerzburg Gold coin is beautifully designed and represents a part of German history.

The gold coin has an edge bar and a rippled edge. It was designed by German stamp artist, medalist and graphic artist Dietrich Dorfstecher.

The front shows the Wuerzburg Residence and the Gardens. In the center the “Ehrenhofseite” with the courtyard garden is depicted. Next to the motif, on the left, the words "Unesco Welterbe" are embossed. The inscription below the motif is “Würzburg Residenz und Hofgarten”.

The back shows the Federal Eagle as the central motif. Below the Eagle the nominal value of 100 Euros is stamped. Surrounding the bottom edge 12 stars are displayed representing the European Union. Above the motif the inscription "Bundesrepublik Deutschland 2010" can be seen. The mint mark is displayed directly next to the motif.

The 100 Euro commemorative gold coin series has been issued annually by Germany since 2002. Usually one the many German UNESCO World Heritage sites is honored in the motifs.

The Wuerzburg Residence and Gardens was the third German UNESCO World Heritage site after the Aachen Cathedral in 1978 and the Speyer Cathedral in 1981.

The Wuerzburg Residence was selected as a UNESCO site because it is considered "the most uniform and extraordinary of all Baroque locks".