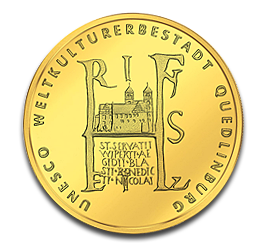 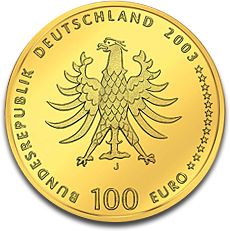 The German 100 Euro commemorative coin from the year 2003 is dedicated to the UNESCO World Heritage Quedlinburg. The coin shows the St. Servatius Church in Quedlinburg and the coat of arms of Emperor Heinrich I.

Quedlinburg is an famous city is Germany that is said to have roots dating back to the early 9th century. This is a brilliantly designed coin that celebrates German history.

Every year Germany issues a 100 Euro gold coin with a different design. These coins are popular with both investors and collectors.

Like all 100 Euro gold coins of the series, the Quedlinburg has an edge bar and a rippled edge. The theme of the coin is the city of Quedlinburg, which was included in the UNESCO list in 1994.

The marginal inscription on the front is "Unesco Weltkulturerbestadt Quedlinburg". The motif in the center of the coin depicts the St. Servatius church, which was inserted into the Emperor Heinrich I. coat of arms.

The portrait was created by the German sculptress and medalist Agatha Kill. The following famous Quedlinburg sacred buildings are mentioned below the main motif in characters:

The reverse of the gold coin shows as a motif a representation of the German Federal Eagle. The mint mark is imprinted directly below the Eagle. The inscription around the edge of the coin reads "Federal Republic of Germany 2003" and "100 Euro". On the right outer edge 12 stars are embossed which represents the European Union.

The  Gold Euro coin series comes in three different variations issued by the German Ministry of Finance. The first is the 200 Euro Gold Coin which was launched in 2002, with the fine weight of 1oz and the theme "Monetary Union - Introduction of the Euro".

The third variant has a nominal value of 20 Euros and a fine weight of 1/8oz. The coin series was introduced in 2010 and went for six years  concluding in 2015. Each year highlights a different design with a theme of the "German Forest".

In 2016 a new series with the topic "Native Birds" was issued. It is also designed with six different motifs for six years.

The old town of Quedlinburg was registered in the list of UNESCO World Heritage sites in 1994. Quedlinburg was the first UNESCO theme of the new German 100 Euro commemorative coins in 2003. The series began in 2002 with the publication of the coin "Monetary Unions - Introduction of the Euro".