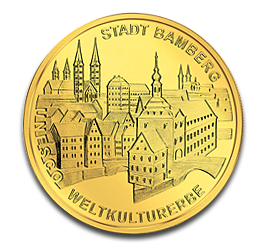 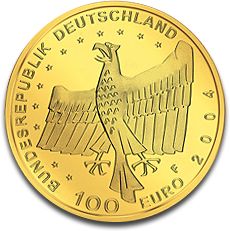 The 100 Euro Bamberg Gold coins were issued in 2004. They have a fineness of 999.9 / 1000 and a fine weight of 1/2oz. These coins are sold in the original gift box, packed in a plastic capsule with certificate. This coin was issued to commemorate the historic city of Bamberg in Germany. The 100 Euro Bamberg has a high level of gold purity and is a sought after coin for collectors due to its limited circulation. The coin is also an excellent gift, as it comes in a nice gift box with a certificate. Gold is often used to commemorate historical events and places. As a result, this coin is a good choice for anyone who is interested in German history.

Equipped with edge bar and a rippled edge, the 100 Euro gold coin shows the German town Bamberg. The main subject in the foreground is the Bamberg Town Hall, with adjacent buildings and bridges.

In the background the famous four-towered Bamberg Cathedral and another church is seen. The edge-side inscription reads "Bamberg" and partially marked into the subject are the words "Unesco world heritage".

Designed by the artist Ulrich Boehme, the reverse shows an interesting variant of the federal eagle. The design is surrounded by 12 stars, representing the European Union. Below the motive the mintmark of the mint can be seen. The edge reads "Federal Republic of Germany" and "100 Euro 2004".

100 Euro gold coins have been issued annually since 2002 by the German Federal Ministry of Finance. The theme of the series is usually a German UNESCO heritage site, with the exceptions in 2002 and 2005. The Bamberg 1/2oz 2004 edition is the coin being offered by CelticGold. The old town of Bamberg was added to the UNESCO world heritage list in 1993. In 2002 the 1oz variant was marked with a nominal value of 200 Euro and a quantity of 100,000. The theme of the coin was the introduction of the Euro. The third variant is the Gold Euro with a nominal value of 20 Euros and a fine weight of 1/8oz. The series was issued for the first time in 2010 and was created for 6 years, with 2015 being the last edition. The topic was the "German Forest".