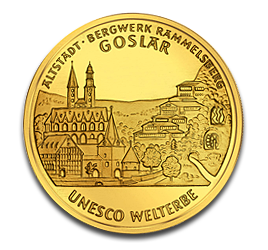 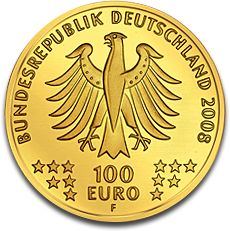 Goslar is a historic city in Germany that was added to the UNESCO World Heritage site in 1992. The commemorative coin honors the city of Goslar and depicts its famous cathedral and the Rammelsberg mine.

Each year the motif on the 100 Euro Gold coin changes to celebrate some aspect of German history or culture. These coins are an excellent choice for both investors and collectors to consider.

Like all gold coins of the series, the Goslar has an edge bar and a rippled edge. The edge bar gives the coin stability, improves stackability, and protects the motif. The coin was designed by the German engraver Wolfgang Theodor Doehm.

The front predominately depicts the market church of St. Cosmas and Damian, with its two towers. In the foreground you can see the wide gate of Goslar. The right side features the Rammelsberg and its mines.

The design also details mining buildings and a water wheel. Furthermore, a typical landscape is visible in the background. The inscription on the upper side reads "Altstadtbergwerk Rammelsberg" and "Goslar". At the bottom of the coin the words "Unesco Welterbe" are embossed which translates to “Unesco World Heritage”.

The reverse side, like the front, is redesigned annually. It shows as the main motif the German Federal Eagle and 12 stars which stand for the European Union. The inscription is “Bundesrepublik Deutschland 200” which translates to "Federal Republic of Germany 2008". On the bottom of the coin "100 Euro" and the mint mark “J” is shown.