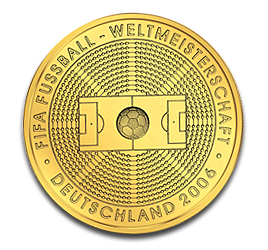 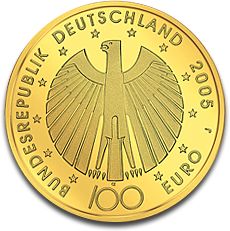 One of the unusual features of the coin is the design date of “2005” is embossed on the reverse side, while the issue date of “2006” is imprinted on the front.

100 Euro Gold coins are an excellent option for collectors and investors to consider. The coins celebrate different aspects of German history and culture.

The FIFA World Cup gold coin was designed by German sculptor and medalist Heinz Hoyer in 2005. This edition, like all coins of the series, has an edge rod and a rippled edge.

On the front an abstract representation of a circular stadium, with encircling spectator seats can be seen. Centrally located in the middle the image of a football, along with a football field is shown. The inscription around the edge bar reads "FIFA Fussball Weltmeisterschaft · Deutschland 2006".

As with all German gold euro coins, the back shows the Federal Eagle and 12 stars which represent the European Union. The caption reads "Bundesrepublik Deutschland 2005" and "100 Euro".

The mint marks that are embossed on German Gold coins correspond to the following mints that are listed below:

With the introduction of the Euro the Federal Ministry of Finance issues new Euro commemorative Gold coins every year. There are three versions, with the following denominations: 200 Euro, 100 Euro and 20 Euro.

Germany 100 Euro gold coins were issued for the first time in 2002. They are issued annually and always have a different design. The fineness of the gold coin is 999.9/1000 and the fine weight is 1/2oz.

The third and smallest version was issued for the first time in 2010. The series included six different coins dedicated to "German forest". The face value of the coins is 20 euros, with a fineness of 999.9/1000 and the fine weight of 1/8oz. In 2016 the first coin of the second series was released, with the theme "Domestic birds". The second series will also run for 6 years.