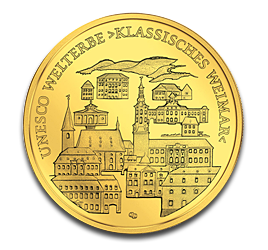 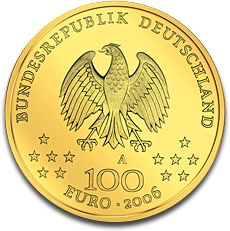 Since 2002, the 100 Euro commemorative gold coins have been issued by the Federal Ministry of Finance. The 100 Euro Gold Coin 2006 Weimar had an initial price of 263 Euro.

The 100 Euro Weimar ½ oz Gold Coin 2006 has an edge bar and a rippled edge. The front shows famous buildings in the city of Weimar, as well as a small representation of the Thuringian hills. The letters "UNESCO WORLD HERITAGE >KLASSISCHES WEIMAR<" are imprinted around the edge. The design of the back shows the federal eagle. Below the motif 12 stars, representing the countries of the European Union, can be seen. Also, directly below the motif, the mint mark of one the five German state mints is imprinted. The nominal value of 100 Euros, the year of 2006 and the lettering "BUNDESREPUBLIK DEUTSCHLAND" is imprinted.

Manufacturer: Official Sales Agency for Collector's Coins of the Federal Republik of Germany