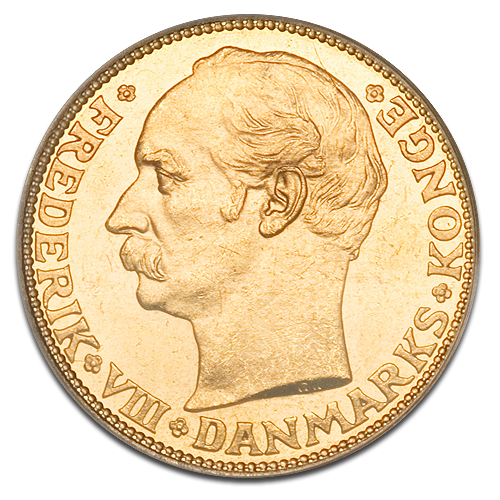 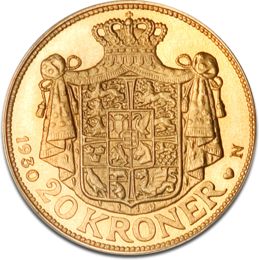 20 Kroner Frederik VIII Gold coins were minted in Denmark from 1908 to 1912. The coins have a gold content of 8.06 g and were produced in a gold-copper alloy.

20 Kroner coins from Denmark have a fine weight of 8.06 g and a total weight of 8.96 g. They were manufactured in a gold-copper alloy with a fineness of 900/1000. The high copper content provides good scratch resistance and also gives the coin a golden-red appearance.

20 Kroner Frederik VIII. Gold coins have a typical golden reddish color which is common with all circulation coins that share a high copper content. This is due to the natural red color of copper and the characteristic that copper corrodes and turns darker in color over time. Trimmed copper has a very bright reddish color.

The obverse shows King Frederik VIII. of Denmark. The image of the King is depicted looking to the left. Most coins have the image of the Regent pictured to the right. One might say this is an unusual design. The marginal inscription reads: FREDERIK VIII DANMARKS Konge.

The historical Coat of Arms of Denmark is the motif of the back. An ornamental circle surrounds the edge side. The engravings on the back include the embossing year, the nominal value (20 Kroner), a heart and the letters "VBP".

"Friedrich VIII" was born on June 3, 1843 in Copenhagen and died on May 14, 1912 in Hamburg. Frederik VIII was King of Denmark from 1908 until his death in 1912. The circumstances of his death were very mysterious: He died during a night time trip to Hamburg, where he was found dead in the street.

There are three different editions of Kroner Gold coins: