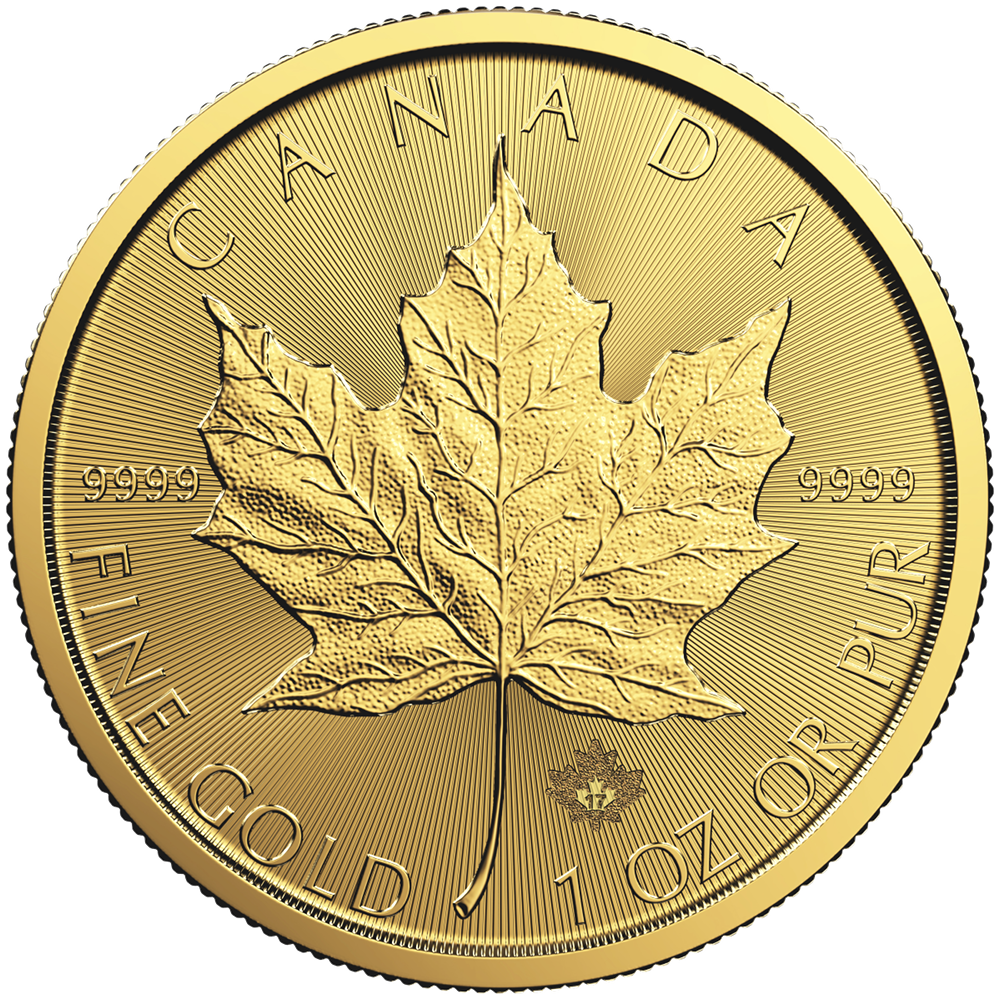 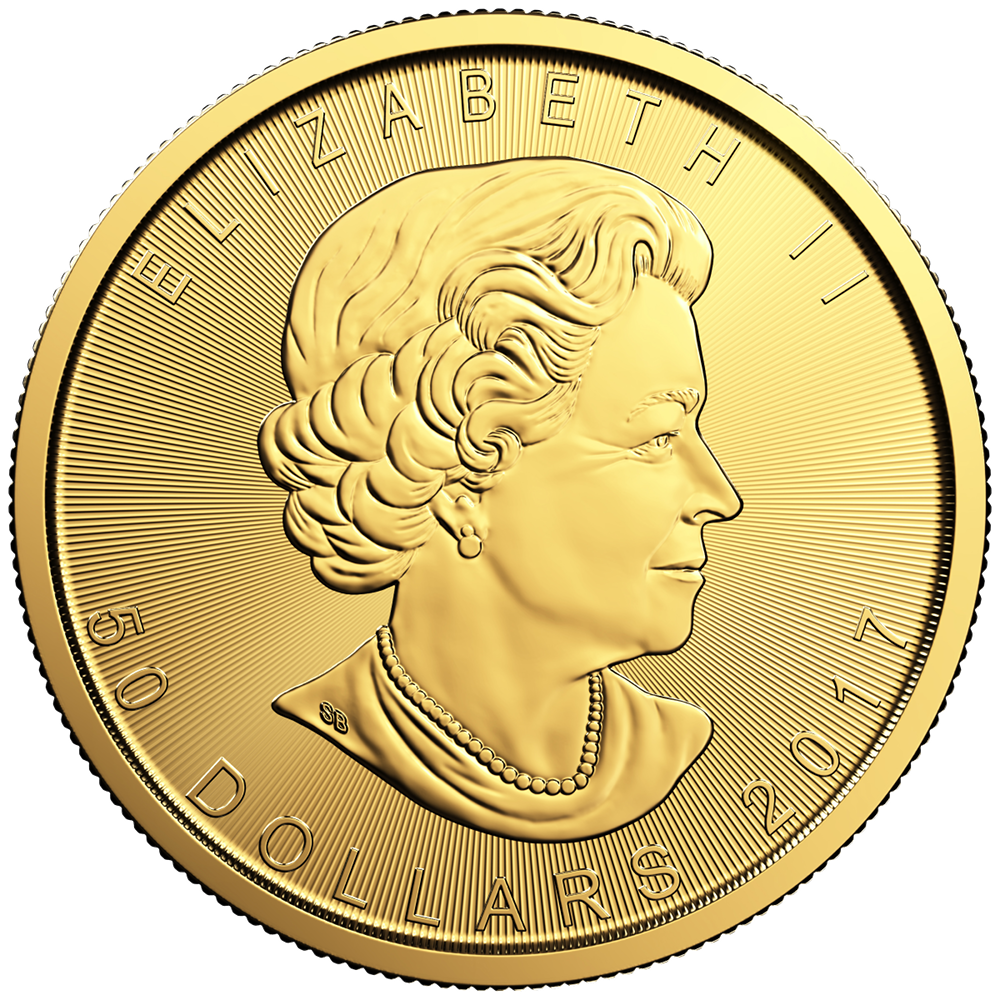 Introduced in 1979, the Maple Leaf came about due to the ban on imports from South Africa in the 1970s. After the South African Krugerrand, the Gold Maple Leaf was the second investment gold coin to be introduced to the market for retail investors.

The coins comes in brilliant uncirculated condition. It’s recognized around the world for the famous motif of the Maple Leaf, which has been a national symbol of Canada since the 18th century.

The high level of purity protects the coin from corrosion over time. However, 24 karat coins like the Maple Leaf are susceptible to surface scratches. Therefore, the it should be kept in its protective packaging.

The key specifications of the 1 oz Gold Maple Leaf 2017 are listed below:

The Gold Maple Leaf was first introduced in 1979. At the time, the South African Krugerrand was the only other investment bullion coin available to the retail investor. Because of economic sanctions against South Africa due to apartheid, sales of Gold Maple Leafs took off.

Many western countries placed a ban on imports from South Africa. This created a market for the Maple Leaf because for a time it was the only other option to the Krugerrand. Many countries recognized the opportunity, and began minting their own investment gold coins and marketing them to gold investors around the world.

From 1979-1982 the fine content of the Maple Leaf was .999. In 1982 the fineness was increased to “four nines” fine gold. The Maple is regarded as one of the purest gold bullion coins on the market today.

Appearance of the Maple Leaf

The Gold Maple Leaf is recognised by many as the best designed bullion coin in the world. Its consistent design featuring the famous Maple Leaf is known to gold investors everywhere and contributes to its popularity.

One of the other distinctive features of the coin are the new security features that were recently introduced. The security features include a laser micro engraved maple leaf on the reverse side of the coin. The year of issue is marked in the center of this image and only visible under magnification.

Radial lines were also added on both sides of the coin. These security enhancements protect against counterfeiting.

The Front of the coin depicts the famous image of the Canadian Maple Leaf, which is one of the national symbols of Canada. To the right and left of the Maple Leaf the fine gold content of  “9999” is imprinted. Above the Maple Leaf the country “CANADA” is embossed.

On the bottom outer edge the words “FINE GOLD” and “1 OZ OR PUR” are engraved.

The reverse shows the iconic image of Queen Elizabeth II. The depiction of the Queen is a common motif on all commonwealth coins. Along the outer edge, above the Queen, “Elizabeth II” is embossed. Along the bottom outer edge the inscription reads “50 DOLLARS 2017”.

Interesting Facts about the Maple Leaf

Tips for buying the Maple Leaf

When buying the 2017 Maple Leaf investors should become familiar with the factors that make up the price. The spot of price of gold is determined by the minute by minute price of the metal on the trading exchanges around the world. In addition, gold coins carry a premium that is added to the spot price.

The premium is composed of the the costs and margin of the mint and the bullion dealer. In addition, premiums can also be influenced by supply and demand. During times of high demand premiums will tend to increase.

Generally speaking, gold bars have the lowest premiums followed by 1 oz coins. The premium on 1 oz coins will vary greatly depending on the type of coin. Fractional sizes such as ½ oz, ¼ oz and 1/10 oz will typically carry a higher premium because they are more expensive to mint.

There are also price differences depending on the bullion dealer, as each dealer has a different cost structure. Always choose a reputable dealer who has a wide selection of bullion products. Developing a long term relationship with the bullion dealer is important as it makes it much easier to resell your coins and bars in the future.

The Royal Canadian Mint was founded in 1908 as a branch of the Royal Mint in the United Kingdom. The first coin produced by the mint was a Gold Sovereign with a “C” which stood for Canada. In 1912, the Department of Finance instructed the mint to manufacture 8,000 five dollar gold coins and 8,000 ten dollar gold coins. These were the first Canadian gold coins inscripted with the words “Canada”.

Today the Royal Canadian Mint is one of the most technologically sophisticated and respected mints in the world. The mint produces a wide range of gold, silver, platinum and palladium bullion products. The Maple Leaf series is one of the top selling brand name coins globally.

Advantages of the Maple Leaf

There are many key advantages of the 2017 Gold Canadian Maple Leaf 1 oz coin.

Investors  and collectors should understand that gold is a “soft” precious metal. Pure gold coins like the Maple Leaf can develop surface scratches. It is therefore recommended to keep the coins in their protective cases.

The following criteria can be applied to the Maple Leaf gold bullion coin to be. Is regulated the § in Germany under the Value Added Tax Act section 25c.