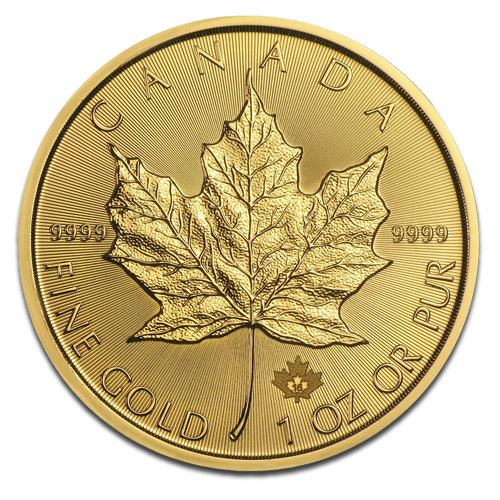 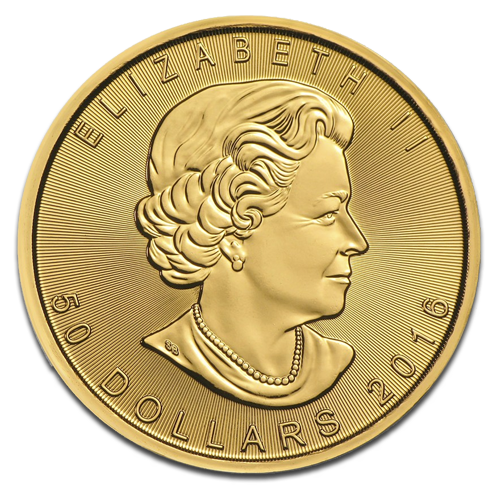 The 2016 Maple Leaf 1oz is now available. The Maple Leaf gold coin is one of the three best-selling gold bullion coins in the world. It has as its predecessors since 2013, a security feature in the form of a small laser engram in which the year is written.

The Maple Leaf was introduced in 1970 by the Royal Canadian Mint and had an annual mintage of 1,000,000 pieces. In the time of the oil crises from 1974 to 1984, investors flew to the relative safety of gold. At that time the South African Krugerrand was the world's undisputed leader of gold bullion coins, which changed after the import ban in 1986. The Maple Leaf demand thrived during that time along with the Krugerrand.

Appearance of the Maple Leaf

The appearance of the Maple Leaf 1oz 2016 is determined by the two motives  "Maple Leaf and Elisabeth II". The obverse and reverse has radial lines, which run to the center inwards and makes counterfeiting immensely hard. In addition, the gold coin has a rim and a rippled edge. One function of the edge rod is to improve the stackability. The addition of the rippled edge should make a damage or cut to the gold coin immediately visible. The radial lines and the laser engram safety feature are intended to impede the falsification of the Maple Leaf.

The design of the front is the typical symbol of the Canadian maple leaf. Below the motif to the right the laser engram security feature can be seen. It shows a small maple leaf in which are the last two digits of the laser engraved year 2016. Not readable by the naked eye, one needs a magnifying glass to read.

The following words and numbers are embossed

The following words and numbers are embossed

The Maple Leaf 1oz gold coin has a safety feature in the form of a small laser engraved maple leaf, with inserted year (16). The second heaviest gold coin in the world is a Maple Leaf, with the weight of 100kg and a circulation of five pieces.

The Maple Leaf is also available in platinum and palladium.

Tips for buying the Maple Leaf

When buying Maple Leaf gold coins and gold coins in general some basic knowledge is needed. In our gold shopping guide we provide an overview of what to look for.

Composition of the price

The price of the Maple Leaf is composed of the current gold price and the premium. The fee is charged by the Mint and the seller to cover costs and to obtain a margin.

Retail investor products are usually gold bullion or gold coins. The production of gold bullion is the cheapest production form and is therefore provided with the smallest premium (about 1%). 1oz Maple Leaf Gold Coins carry a premium of about 3% to 5%. The premium of fractional sizes in most cases are much higher.

As a rule of thumb an mint-state Maple Leaf’s trades at a higher premium because they have not been in circulation and the demand is higher. Furthermore, there are price differences between the gold sellers because banks and bullion dealers have different cost structures and margins.

The Maple Leaf 1oz has many advantages and is overall an excellent gold bullion coin. The biggest advantage is the global recognition, plus Maple Leaf gold coins are exempt from VAT. Furthermore, the Maple Leaf 1oz has one of the lowest premium over other gold bullion coins (approximately 3.5%). This lower premium also carries over to smaller weights such as 1/2oz, 1/4oz, 1/10oz and 1/20oz. However smaller weights can have premiums of up to 15% due to higher production costs.

Furthermore, the 2016 1oz variant has a safety feature that will complicate the counterfeiting of the coin. Since 1979 the Maple Leaf is recognized worldwide with banks, savings banks and precious metal companies worldwide. Since the Maple Leaf has a fineness of 999.9/1000 it can not corrode, as opposed to 22 karat gold coins which can undergo a color change because of the copper content. The only downside of Maple Leaf gold coins is that gold is very soft and the lack of a hard copper alloy content makes the coin easily scratched.

The following criteria can be applied to the Maple Leaf gold bullion coin to be. Is regulated the § in Germany under the Value Added Tax Act section 25c.