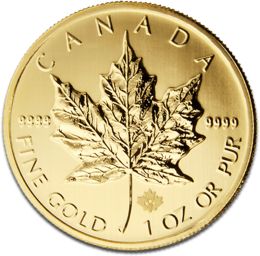 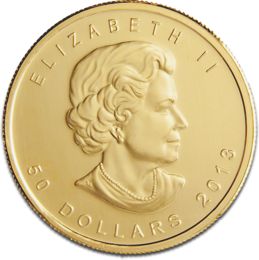 The Maple Leaf gold coin is minted in fractions beginning with 1/20 up to 1oz.

The Maple Leaf gold coin is denominated with $50 and legal tender in the Canadian Currency and Exchange Act as specified in Part 1 of the schedule to the Act. But the Maple Leaf is not viewed as a coin in circulation as the coin is mainly bought by gold investors and numismatists.

The real value of the Maple Leaf is founded in the content of pure gold which is 31.10 grams for the 1oz coin.

Design and Production of the Maple Leaf Gold Coin

Intricately micro-engraved design produced by the Mint’s innovative use of laser technology confirms the authenticity of the coin.
An even more secure investment option; the Mint’s 1-ounce GML is an attractive acquisition for both first-time precious metals buyers and long-term investors.

The laser mark will change annually to feature the last two digits of each corresponding year of issue.

The inscriptions of the Maple Leaf gold coin:

Where to buy the 1oz Maple Leaf Gold Coin?

The popular 1oz Maple Leaf gold coin can be best bought online at best price here with us on www.CelticGold.eu.