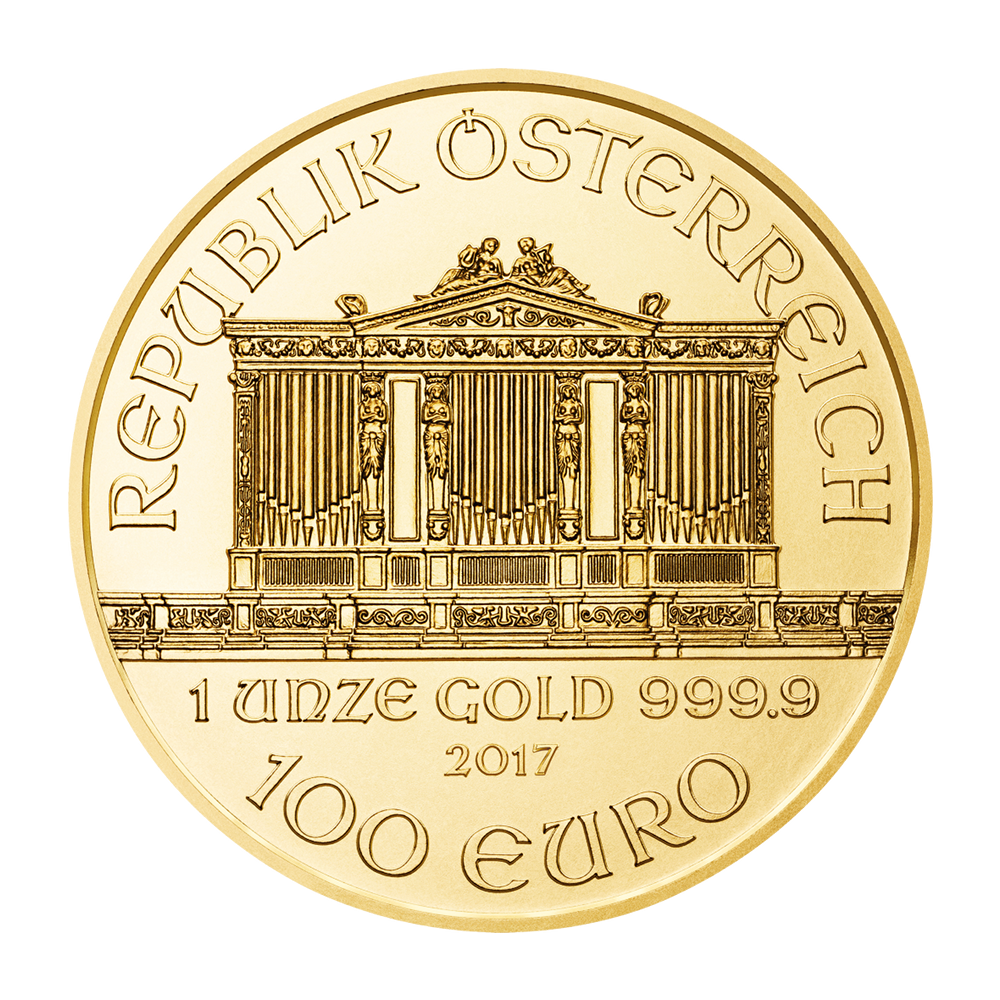 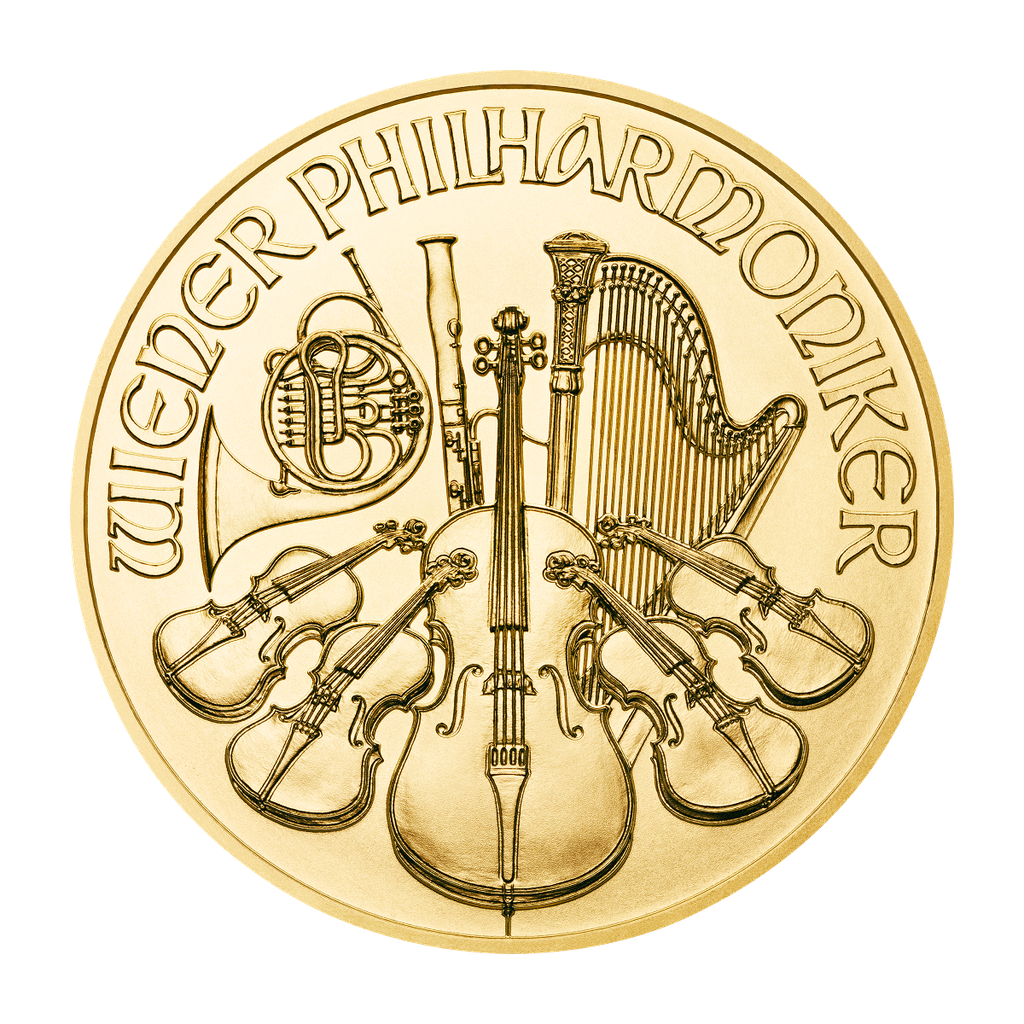 The Philharmonic is .9999 pure gold. The high level of purity gives the coin a bright shinny golden appearance. The advantage is that it makes the coin resistant to corrosion and changes in color. The one drawback to pure gold coins like the Philharmonic is that they can be prone to surface scratches. Therefore it is recommended that the coin remain in its protective case.

History of the Philharmonic

The Gold Vienna Philharmonic is produced by the Austrian mint. The Name “Philharmonic” comes the famous orchestra (Wiener Philharmoniker) which the coin was named after.

The orchestra was founded in 1842 and the design celebrates the history of the “Vienna Philharmonics” The annual New Year’s concert is one of the most famous classical concerts in the world.

The 1 oz gold Philharmonic was first introduced in 1989 and had a face value 2,000 Austrian Shillings. With the introduction of the Euro in 2002, the face value was changed to 100 Euro.

Thomas Pesendorfer, the head of engraving of the Austrian Mint designed the Vienna Philharmonic. The coins appearance has not changed since it was introduced. The annual New Year’s concert is one of the most famous classical concerts in the world.

One of the advantages of the Philharmonic is its consistent appearance from year to year. The coin features a rippled edge and an edge bar. The unique design of both elements ensure safety and design. The edge bar is also slightly raised to facilitate better stackability of the coins.

Above the Golden Hall the words “REPUBLIK OSTERREICH” are embossed. Below the The organ the fine weight “1 UNZE GOLD 999.9”, year “2017” and nominal value “100 EURO” are engraved.

The Reverse of the Gold Philharmonic depicts various instruments that are used by the Vienna Orchestra. These include 4 violins, cello, harp, bassoon, and a horn. A total of 8 musical instruments are shown. Above the instruments the name of the orchestra is shown and reads "Wiener Philharmoniker".

Before buying the 2017 Gold Philharmonic, investors should learn about the factors that influence the gold price. The biggest influencers include supply and demand, currency movements, and central bank policy. Generally speaking investors turn to gold as a way to preserve purchasing power during times of uncertainty.

The final price of the 1 oz Vienna Philharmonic 2017 is composed of the current gold price (also known as the spot price) and the premium. The premium covers the costs and margin of both the mint and the bullion dealer.

The price of any commodity or precious metal fluctuates constantly on the various market exchanges around the world. The gold spot price is the market price of the precious metal. The premium is added to the spot price, which results in the final price of a coin or bar.

The premium is determined by the Mint and subsequently by the seller. The mint of the 2017 Gold Philharmonic is the Austrian Mint. As a state owned corporation all costs and margin are added to the coin price.

What Factors Increase the Premium?

Other factors that influence the premium include: the demand in the marketplace; and the grading level of a coin. In times of high demand premiums will tend to increase.

Bars usually carry the lowest premium because they are less expensive to mint. 1 oz coins are the most popular forms of investment gold, however the premium will vary greatly depending on the coin you choose.

2017 Vienna Philharmonic 1 oz gold coins are usually a little more expensive, since they have the grading “New, mint-state, uncirculated".

Fractional sizes below 1 oz carry a higher premium because production costs rise in relation to the processed gold.

As an example: For the same amount of gold ten 1/10 oz Vienna Philharmonic need to be minted as compared to one 1 oz Philharmonic.

The premium will also vary depending on the bullion dealer, as each dealer’s cost structure is different. Keep in mind to always buy from a reputable dealer who has a wide selection of bullion products to choose from.

The Austrian Mint is located in Vienna and has a rich history minting Austrian coins. The first coins minted in Vienna were made of silver in 1194 and used to ransom King Richard I the Lionheart from Duke Leopold.

Since 1989, the mint has been a public company and a subsidiary of the National Bank of Austria in Vienna. In addition to gold, silver and platinum bullion coins, the mint is also responsible for producing Austrian euro coins.

In 2004, for the 15th anniversary of the Vienna Philharmonic bullion coin, the mint produced a 1,000 ounce commemorative Philharmonic with a nominal value of 100,000 euro. Known as “Big Phil” the coin consists of 31.103 kg of pure gold. It is one one of the largest bullion coins ever produced.

Advantages and Disadvantages of the Gold Philharmonic 1oz 2017

The main advantages of the 2017 Vienna Philharmonic are as follows:

The only real disadvantage of the 1 oz Gold Philharmonic 2017 is the poor scratch resistance. Because of the high purity level the the coin is susceptible to surface scratches.

As a result, the Philharmonic should be handled with care and kept in its protective packaging.

What makes the Vienna Philharmonic a gold bullion coin?

In all European countries gold investment coins are exempt from VAT. The following criteria make the Vienna Philharmonic 1oz 2017 a bullion coin.