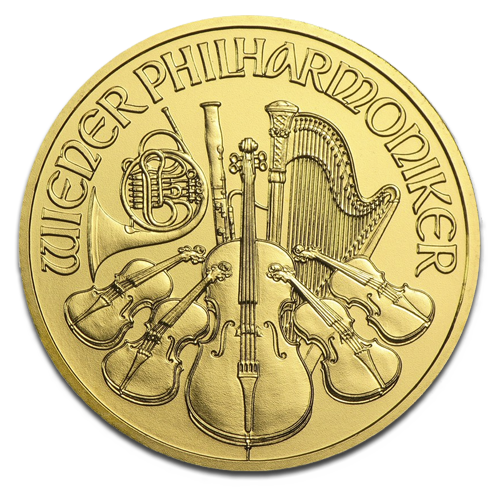 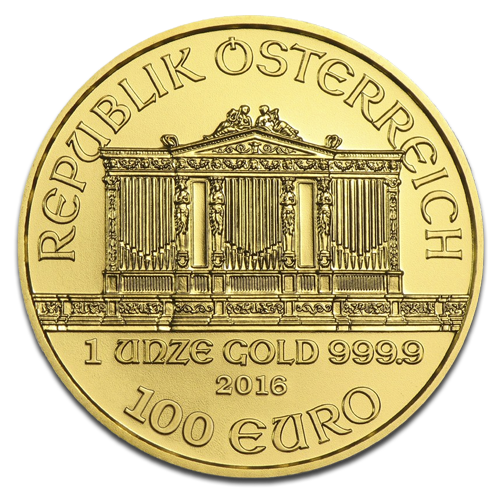 History of the Gold Philharmonics

The name of coin describes the world famous orchestra the “Vienna Philharmonics” founded in Vienna in 1842. The orchestra consists of members of the Vienna State Orchestra. Since 1941, the annual New Year’s concert is one of the most famous classical concerts in the world.

The first edition of the 1oz Vienna Philharmonic in 1989 consisted of 351,000 units. The second edition in 1990 already guaranteed the Vienna Philharmonic the title "best selling gold coin in Europe 1990". In the next few years it would become even more successful as on several occasions it became the best selling in the world. Available in sizes of 1oz, 1/2oz, 1/4oz, 1/10oz and 1/25oz, the Philharmonic was denominated in Euro in 1999 making it the first Euro-Investment coin.

In 2009 the 1oz Gold Philharmonics had the highest annual sales with 835,700 pieces. Since 2008 the 1oz Philharmonic is also available in silver. Annual sales of the Silver Philharmonics are much higher, reaching double-digit million in some years.

The unchanged appearance of the Philharmonic is one of its advantages. also for the current year 2016. The coin features a rippled edge and an edge bar. The rippled edge is unsual as with every three notches one notch is missing. Both elements ensure safety and design. The edge bar is also mandated to facilitate better stackability of the coins.

The design of the obverse is determined by the presentation of the famous organ of the Vienna Orchestra of the Golden Hall. Also on display is part of the balcony (balustrade) where the organ is. The design of the balcony reaches into the edge bar, which is again a rather rare aspect of a bullion coin. In addition all inscriptions minted on the obverse are as follows.

What is the Premium of Gold Bullion Coins?

The premium is determined by the Mint and subsequently by the seller. The mint of the 2016 Gold Philharmonic is the Austrian Mint. As a state owned corporation all costs and margin are added to the coin price.

The premium is slightly increased by the bullion company as the handling costs and the margin need to be included.

In Addition What Factors Increase the Premium?

2016 Vienna Philharmonic 1oz gold coins are usually a little more expensive, since they have the grading “New, mint-state, uncirculated". Fractional sizes below 1oz carry a higher premium because production costs rise in relation to the processed gold.

As an example: For the same amount of gold ten 1/10oz Vienna Philharmonic need to be minted as compared to one 1oz Philharmonic. As already mentioned, the sellers profit is included in the final price. As a result, there are price differences between the various precious metal dealers, because each dealer has a different cost structure.

Advantages and Disadvantages of the Gold Philharmonic 1oz 2016

The Vienna Philharmonic 1oz gold 2016 is made of 999.9/1000 gold. As with all 24 karat pure gold coins the typical gold coloring is retained and even over years the Philharmonic does not corrode. The coin is produced in such large quantities that the premium is relatively low.

The disadvantage of 24k coins is the poor scratch resistance as compared to 22k coins. Furthermore the 1oz Gold Philharmonic has the lowest premium (4 to 5%) in comparison to the smaller weight editions. The 1/2oz, 1/4oz and 1/10oz coins can carry premiums of up to 15%. The Philharmonic gold coins are recognised with banks and bullion dealers globally. And the biggest advantage of the 1oz Vienna Philharmonic 2016 gold coin is the exemption from VAT.

What makes the Vienna Philharmonic a gold bullion coin?

In all European countries gold investment coins are exempt from VAT. The following criteria make the Vienna Philharmonic 1oz 2016 a bullion coin.