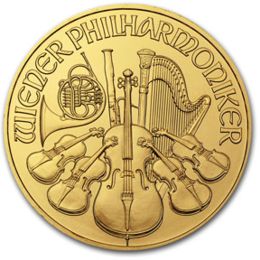 Design and Production of the Vienna Philharmonics Gold Coin

The Austrian Mint is one of the oldest mints worldwide and mints over 300 million coins every year. The design of the Vienna Philharmonics comes from Thomas Pesendorfer who works for the Austrian Mint until today.

The Gold Philharmonics has been a success story from the beginning. Awarded with ‘Most bought coin in the world’ in 1992, 1995, 1996 and 2000 the Philharmonics is the Number 1 coin in Europe and No. 2 coin in the world. The uniqueness of the Gold Philharmonic coin can also be assumed when taking into consideration that it is the only bullion gold coin to be featured on the side of an airplane, on an Austrian Airlines Airbus A340. The total numbers of coins minted are more than 10 million Ounces.

The coin motive site of the coin shows the famous orchestra with string bass, cellos, violins, a bassoon, harp and Viennese horn.

The reverse shows the Great Organ with the inscription: