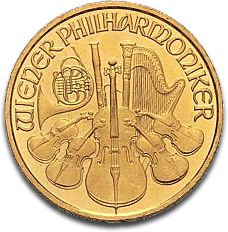 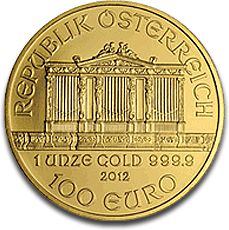 The Vienna Philharmonic 1oz gold coin has a fineness of 999.9/1000. This makes the coin insensitive to corrosion and changes in color. As we know the Krugerrand changes color over time, so this is important information to note. But 24 carat fine gold also has weaknesses, which is mainly low scratch resistance. This is because gold is a very soft precious metal. For this reason, copper was added to coins in circulation as an alloying constituent  in earlier times. Copper is a very hard precious metal. In comparison to the Sovereign bullion coin which has 22 carats, with the components of 91.67% gold and 8.33% copper.

Three years after the ban on imports of the South African Krugerrand, the Austrian mint issued its own gold bullion coin on the market in 1986. They were issued in the name "Wiener Philharmoniker", which translates to Vienna Philharmonic. What no one could have guessed, was the huge success of this first purely European bullion coin.

The design of the Vienna Philharmonic was done by Thomas Pesendorfer, he is today head of engraving at the Austria Mint. The knurled edge has a bar and ripples. Both elements ensure safety and design. The edge rod is also mandated to facilitate better stackability of the coins and also minimizes scratching on the coins surface.

The design of the obverse is determined by the presentation of the famous organ of the Vienna Orchestra of the Golden Hall. Also on display is part of the balcony (balustrade) where the organ is. The marginal inscription on the subject is "REPUBLIk ÖSTERREICH" directly under the motive is "1 UNZE GOLD 999.9" including the year of mintage. Also in the lower area is the nominal value of "100 EURO".

The back of the Wiener Philharmoniker 1oz shows typical instruments of classical music. You can see in the background horn, bassoon and harp. The five leading string instruments are a cello, which is shown in the middle. To the left and right from the central Cello violas can be seen next to violins. The design name of the gold coin is to be read "Wiener Philharmoniker".

The Vienna Philharmonic 1oz gold coin is produced in such large quantities that the premium is relatively low. Furthermore, it has the advantage of all 24 carat gold coins in that it retains the typical gold coloring, even over years the Philharmonic does not corrode. The disadvantage of the coins is the sensitivity to scratching as hard alloy components such as copper are missing. The biggest advantage of gold bullion coins but is the exemption from VAT.

The Vienna Philharmonic is the first purely European gold bullion coin. In the mintage years from 1989 to 1998 the nominal value was 2,000 Schillings. To celebrate 15 years of the Vienna Philharmonic in 2004 the so called "BigPhil" was released. This limited edition coin had a total circulation of just 15 pieces. The BigPhil weighs 1000 ounces and has a diameter of 37 cm and thickness of 2 cm. It is today the heaviest European gold coin.

The manufacturer of the 1oz Vienna Philharmonic is the Austrian Mint. The Mint is also responsible for coining the Austrian Euro and shillings prior to 1999. Emerging from one of Europe's oldest coins, the Austrian Mint was first mentioned in documents in 1397. It is known today under the name "Wiener Hauptmünzamt", although it was renamed in Austrian Mint in 1989.

Premium and the Reasons

The Austrian Mint incurred costs during the mintage of the coins, which are allocated to the actual price of gold. These are the production costs of the blanks (coin blanks), in which the rippled edge can be seen. Several factors are involved in the cost of actually coining gold coins. These costs include: Very expensive machinery which is used and where the die must be changed often. Other factors also include personnel costs, storage costs, security, transport costs and much more.

As a rule of thumb the 1oz Vienna Philharmonic has a premium of 3.5% to 5%. Smaller formats such as the 1/10oz can have a premium as much as 15%. Another important factor for the charge is the margin of the seller. There is of course a slight difference in premiums between precious metal dealers and banks.

Another increasing factor is the fact that current 1oz Vienna Philharmonics have a higher premium because they are sold "mint-state - uncirculated". When buying a new gold coin, which was not yet in circulation, then you need to buy mint-state uncirculated because these gold coins have not yet been taken out of their original sealed packaging.