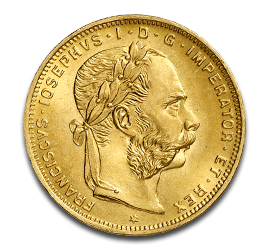 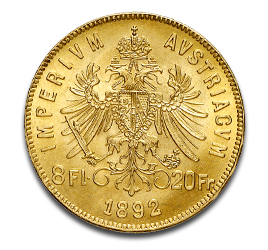 8 Florin gold coins have been produced in such large quantities that they are traded as bullion coins even today. Official copies are minted by the Austrian Mint with the year 1892. The fine weight of the gold coin is 5.81 grams.

Austria was very well known for its gold coins in previous centuries. The Austrian Empire coined the 4 Florin and 8 Florin coins from 1870 until 1892. In 1892, the Florin was replaced by the Crown gold coins. The Crown coins were minted in three different sizes; 10 Crowns, 20 Crowns and 100 Crowns until 1916. In addition, there are official copies of the 8 Florin gold coin, which are issued by the Austrian Mint. All copies are minted with the year 1892.

8 Florin gold coins have a second currency denomination in CHF 20 (20 Fr). In 1865 the so-called Latin Monetary Union facilitated a simplified payment system between different European countries. The founding members were France, Belgium, Italy and Switzerland. Other countries such as Greece, Spain and Austria (1870) were added over the years.

The Austrian 8 Florin gold coins have a gold reddish color, which is due to the higher copper content. The coin has a smooth edge and an edge bar. The front (obverse) shows Emperor Franz Joseph I with his typical beard. He is depicted in profile with a headdress. The inscription is "FRANCISCVS IOSEPHVS I D G IMPERIATOR ET REX". The back (reverse) shows the representation of the Austria-Hungarian central crest for the years (1867 - 1915). The inscription is "Imperivm AVSTRIACVM". The year of issue is  seen at the bottom edge of the coin. Right and left of the crest, the denomination "8 Fl and Fr 20" is imprinted.

Should you wish to buy the Austrian Florin Gold Coins for investment purposes, then we would like to recommend to opt for 8 Florin coins. This variant has the lower premium, compared to the 4 Florin gold coins.