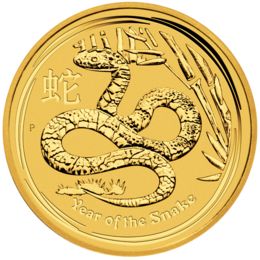 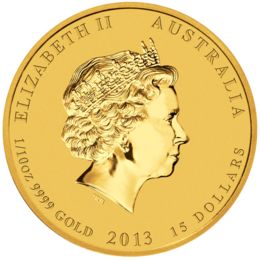 The Perth Mint introduced in 1996 the Lunar I series which lead to the minting of a second Lunar series since 1999. The obverse of the Lunar silver coins changes with the Chinese calendar every year for 12 years.

The Lunar Snake bullion coin has been minted by the Perth Mint in 2013, the year in which the year of the snake is being celebrated. The snake is the sixth of 12 animals in the 12-year cycle of the Chinese zodiac and is a symbol of wisdom and is said to bring good luck and wealth.

The front of the Lunar Snake coin can be considered as classic for most of the Australian silver coins, with the Ian Rank-Broadley effigy of her Majesty Queen Elizabeth II, the nominal value and the inscriptions "ELIZABETH II", "AUSTRALIA", the year "2013 "and" 999 SILVER ".

The back, as the name of this silver coin suggests shows a snake motif. The snake is wrapped around a tree branch and bears a striking scale pattern. Above and below it are a few branches. To the right of the snake are written the Chinese character for snake and the "P" for the Australian Perth Mint. Along the bottom "Year of the Snake" is imprinted.

The Lunar Snake coin appeals to to investors and collectors because of its very limited supply, the variety of denominations and their undeniable beauty.

The coin was issued as legal tender under the Australian Currency Act 1965 and has a fine gold content of 99.99%.

The coin comes in a PVC capsule like all Perth Mint coins.