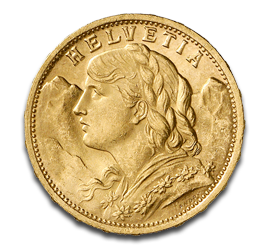 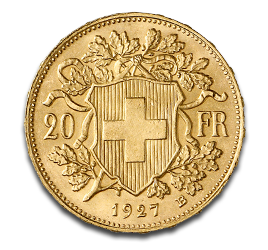 The 20 Swiss Franc Vreneli gold coin was minted from 1897 to 1949 in such large quantities that it is traded as a bullion coin to this very day. It is characterized by good scratch resistance and recognized globally.

The 20 Franc Vreneli has a fineness of 900/1000 with a fine weight of 5,807 g. The alloy is 90% gold and 10% copper. This gives the coin a good scratch resistance, which was very important for previous coins in circulation.

The Swiss Vreneli followed the Helvetia gold coin with a purity of 900/1000 or 21.6 karat in 1897. Up until 1949, the Vreneli was embossed with a total circulation of 58.63 million coins. The Swiss Federal Council created a coin design competition for the new edition of the Helvetia gold coin in 1895. The second place winner was Fritz Ulisse Landry with a design of a young lady with flowing hair on top of a mountain. The draft may have appeared a bit too revealing to the Swiss which is why they changed the hairstyle and appearance of the lady. With these changes, Fritz finally won the competition and from 1897 on the Vreneli was minted with great success.

The 20-Franc Vreneli has a smooth coin edge and an edge rod. The coloring of the coin is slightly reddish due to the copper alloying component. Furthermore, both sides of the gold coin have a decorative circle which runs around the edge rod. The design of the front was created by Fritz Ulisse Landry and shows the representation of a Swiss woman. The background is dominated by a mountain landscape. Above the motif the neo-Latin name for Switzerland "HELVETIA" is imprinted. The reverse depicts, on a vertically striped shield, the motif of the typical Swiss cross. It is surrounded by a large oak. Right and left of the motif is the nominal value of "20 FR". Below the motif is the year of issue and on the right the Mint Mark "B" can be seen.