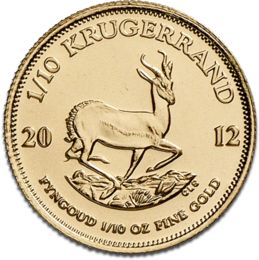 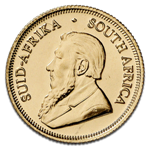 As Krugerrand gold coins are recognised globally buy, sell in short trade is easy around the world. The fractional 1/10oz Krugerrand is the smallest and lightest denominated gold coin of the Krugerrand series. These lovely coins are minted since 1980 from the Rand Refinery in South Africa.

With the weight of one tenth of an (troy-) ounce the Krugerrand 1/10oz is the smallest denominated coin of the series. Perfectly produced in a 22 carat gold and copper alloy the coin contains 91.66% gold and 8.34% copper. The fine weight of 3.11 grams equals exactly 1/10 of an ounce of pure gold. By adding copper to the alloy the Krugerrand shines in its typical red-golden appearance. The copper oxidises over time which means each Krugerrand may appear slightly different depending on storage conditions.

The 22 carat gold-copper alloy is mainly used to extend durability and scratch resistance. As gold is a very soft metal, mixing copper into the alloy makes the Krugerrand coins more resistance to scratches. This method was actually adapted from the gold Sovereign coins in circulation. These coins could be handed, traded and transported more easily without getting worn out.

The 1oz Krugerrand was first minted in South Africa in 1967. Smaller denominations such as ½, ¼ and 1/10oz were introduced by the Rand Refinery in 1980. The success of the Krugerrand is also explained with the fact that gold was traded freely from 17th March 1968 without the influence of the USA.