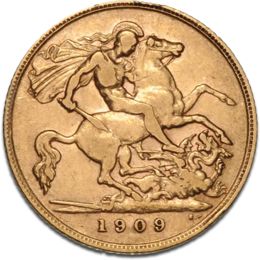 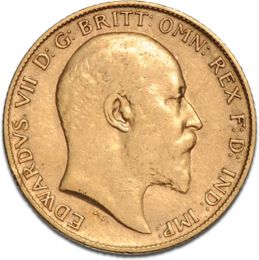 The half Sovereign Edward VII has a fine content of 3.661g gold. It was minted as a circulation coin for the United Kingdom in the years 1902 to 1910.

Theses iconic coins were issued to celebrate the reign of King Edward VII. His rule over the United Kingdom began in 1901 and lasted until his death in 1910.

The Gold Sovereign is one of the oldest gold coins in the world. Prior to 1932 it was a fully circulating coin and at the time a part of Britain’s gold standard currency.

With the fine weight of 3.661g, the half sovereign has exactly half the fine weight of the full Sovereign. The half Sovereign Edward VII has a fineness of 917/1000. The alloy components are gold and copper, which gives the coin a good scratch resistance.

Because of the copper content, Sovereign gold coins have a golden reddish color. Due to persistent corrosion, the color will change over time.

Sovereign gold coins have an edge bar which gives the coin improved stability and stackability. Furthermore, it protects the motif from damage as the edge bar is slightly higher than the motif. The coin also has a rippled edge to prevent from counterfeiting.

The front of the coin shows the profile view of King Edward VII. The back depicts Saint George fighting a dragon. In this representation he sits on a rearing horse, with a waving cloak, corinthian helmet and sword.

Sovereign gold coins have been minted with a 22 carat alloy since 1817. Until the twentieth century Sovereign coins were circulating coins. In addition to the British Pound Sterling, Half Sovereign Gold coins were used as a means of payment.

The front side always shows the King or the Queen who was in charge at the time of the mintage. On the reverse is usually a profile of St. George mounted on horseback slaying a dragon.

The design was created by artist Benedetto Pistrucci. In some editions, depictions of the coat of arms of the United Kingdom is pictured. The representation can vary from one mint to the next.